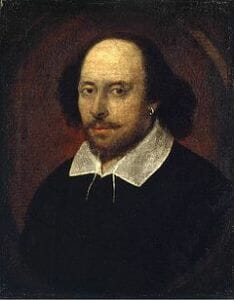 The infamous playwright William Shakespeare is known for a collection of unforgettable publications, including Romeo and Juliet. When he settled down on March 25, 1616 to draft his last will and testament, he was “in perfect health and memory.” This article will touch upon some of his last wishes, including what he left to his wife.

When Shakespeare wrote out his will, he had no idea that he would die less than one month later. His death took place on April 23, and it was unexpected. Not much is known about how Shakespeare spent his last days, but according to the vicar of Stratford’s Holy Trinity Church (where the Bard was buried), he had been on an outing with fellow writer Ben Jonson and poet Michael Drayton. The vicar implied that Shakespeare had drunk too much and fell ill , dying of a ‘a fever.’

When Shakespeare was 18 years old, he married Anne Hathaway , a local girl from Stratford. Together, the duo had three children. They had a daughter Susanna and twins: Judith and Hamnet. Judith wound up marrying a vintner named Thomas Quincy two months before her father died. Their son Hamnet died when he was 11 years old. It was the male heirs of Susanna who received the bulk of Shakespeare’s estate when he died. Among the possessions she received was a large double bed that he and Anne shared.

One of the most talked-about final wishes of Shakespeare was that his wife receives his “second best bed.” Readers of the will believe this statement means that Shakespeare may have had an unhappy marriage. However, there are others who believe the second best bed was the one that the couple used the most and that bequeathing this to Anne was a loving act instead.

Yet, during the days of Shakespeare, it was customary for men to mention their wives in their wills with high praise and love. Shakespeare’s will did not mention his wife in this manner, which is extremely suspicious for someone who made a living out of breathing life into a love story. Others thought that leaving his wife the second best bed was not enough. However, it is important to note that Anne was not left high and dry. She automatically received a widow’s dower, which equaled 1/3 of the income that Shakespeare’s estate has generated.

Also, leaving his wife a bed was not unusual for those times. It was a common practice centuries ago. The bed was carved and offered a soft, comfortable mattress that was not plagued by fleas or vermin. The bed was expensive and a prized possession.

Shakespeare’s will is also very telling. Some believe that he may have known that he was ill. Signatures on the draft were shaky and not characteristic of pre-existing signatures. Was he ill or simply suffering from a writer’s cramp when he drafted his last wishes?

Today, the last will and testament of Shakespeare is stored in an airtight glass and oak box in Somerset House in London. The three-page long document is considered by many as the most famous will in history.