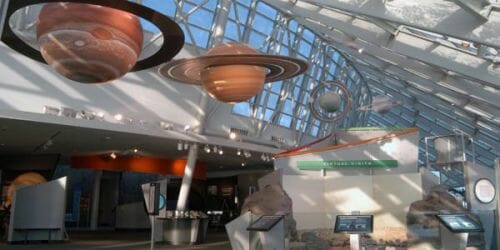 With a variety of objects held in trust with the National Air and Space Museum, there are about 50,000 objects that a visitor may encounter, which include various aircraft, spacecraft, bombs, engines, rockets, uniforms, spacesuits, balloons and artwork. In this article, you will learn more about this particular Smithsonian Museum, as well as other space-related museums in the U.S.

The Smithsonian National Air and Space Museum offers a collection of archival material and images that will entertain history buffs. The large archive includes a range of historic manuscripts, photographs, film and documents. Astronomy enthusiasts will take pleasure in viewing the collection of NASA planetary images and data of the museum.

Some of the objects related to the Smithsonian National Air and Space Museum include accessories such as photographic Mitchell Camera Oil and a range of aerial cameras. A collection of aircraft is kept at the museum, including a reproduction of the 1900 Wright Glider, 1903 Wright Flyer, 1909 Wright Military Flyer, and Abrams Explorer.

Featured current museum exhibits at the space attraction include a display on the Marine Corps aviation (from 1912 to 2012), 50 Years of Human Space Flight, pioneers of flight, and the Wright Brothers and the invention of the flying age.

If you are interested in paying a visit to the National Air and Space Museum, note that the attraction is located in the National Mall Building at Independence Ave at 6th Street, SW in Washington DC. Regular hours of the museum are from 10 am to 5:30 pm, and the site is open every day with the exception of December 25. The admission of the museum is free. During the spring and summer season, you will notice extended hours from March 17 to September 3 ”“ 10 am to 7:30 pm.

Located on 1300 S Lake Shore Dr at Chicago’s Museum Campus in Illinois, you will find the Adler Planetarium, which was the first museum of its kind built in the western hemisphere ”“ dating back to 1930. The Adler Planetarium offers state-of-the-art computer technology and the first StarRider Theater in the world, which makes it the only museum in the world to have two full-size planetarium theaters. Thanks to the Zeiss Planetarium projector, you can enjoy a show that accurately reproduces the movement of every aspect of the night sky.

Lovers of astronomy will enjoy browsing the collection of historical artifacts related to space that stretch across more than 35,000 square feet of space. Some of the displays that you may encounter include: