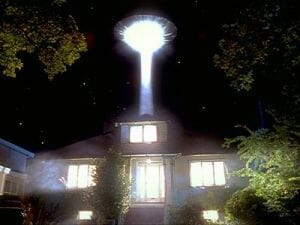 A California witness reporting from the city of Redding has reported that on July 17, 2010 an object entered his field of vision that completely defied any explanation.  As he was swimming shortly before sundown in a pool the witness observed an object that seemed at first to them like a conventional weather balloon.  But as they watched, the object moved in ways that would completely defy explanation.

The object moved, unlike a weather balloon, very steadily from south to North along a straight path, splitting the sky in two in its wake as it passed in relative proximity to the witness.  As the realization that the object they were observing was not merely a weather balloon, the object suddenly the witness began receiving a sort of “transmission” or vision in his mind.  It wasn’t the fact that he was receiving an image alone that seems to stand out in this case so much as the content of the message itself.  The witness making the report to MUFON was quite articulate as they conveyed their message.

As the object traveled across the sky, the witness noted that it was gaining in altitude now more than traveling in a straight line from south to North.  As it approached the witness’ position it all but stopped traveling North and instead simply started moving up into the atmosphere.  As the witness watched the object, noting no light coming from it aside from the reflection of the sun on its glittering surface, he reports getting a very strong impression that the beings inside the craft would be back to take him away.

Though this may sound disturbing to most people, the witness reports that the message was also accompanied by a sensation that going with this craft wouldn’t be all that bad.  The witness welcomed the sensation that he would be taken away by these strange beings, hoping it to come soon.  This strange psychic impression reported by witnesses is getting more common in UFO reports these days as more witnesses report feeling like a sort of “rapture” for abductees is coming.  This is not the prevailing theory on the topic of UFOs certainly, but there is a very strong subgroup of believers that suggest something, often left ambiguous but sometimes accompanied by apocalyptic visions, is coming.  As the object disappeared, the witness was left treading water and awaiting its return.

This sort of spiritual contact with the other side seems reminiscent of the religious idea of a rapture style event with an extraterrestrial twist to it.  And of course with 2012 fast approaching, many people are looking for possibilities to escape a world they see as having too many problems in.  Is it a coincidence that subjects like the Gulf Oil Spill and Global Warming come up frequently when those believing in an alien rapture talk about the end times?  As the world changes more every day it becomes more unfamiliar to us than the faces of the strange creatures said to inhabit these craft.  And when that happens, perhaps even more will find themselves willing to consider hitching a ride across the galaxy.