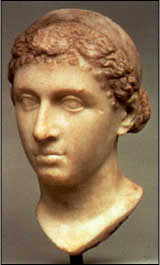 She’s been immortalized by the likes of Elizabeth Taylor and Claudette Colbert. Her lifestyle, romantic antics, and the way she died are all the stuff of legend. When you hear the name ‘Cleopatra,’ it’s hard to ignore. In this article, you will learn more about the woman who ruled with cleverness and also brought Mark Antony and Caesar to their knees.

1.    Cleopatra is known as the infamous ruler of ancient Egypt whose physical beauty was unsurpassed. However, her appearance may have been exaggerated a bit throughout the years. While there is no concrete evidence to prove how Cleopatra looked, there are coins and a couple of marble statues that shed a bit of light on the subject. When taking a look at coins depicting the queen, it is suggested that she may have possessed rather masculine features. It is also possible that her nose was hooked.

2.    Cleopatra possessed charisma, exceptional powers of persuasion, and quick thinking that allowed her to rescue her kingdom from Roman interests for quite some time. Sadly, she was unable to keep the Roman powers away for as long as she would have liked. Cleopatra is known as the last Queen, as well as the Pharaoh of Egypt. After her death, Egypt wound up a Roman province.

3.    Following a loss at the Battle of Actium, Octavian successfully invaded Egypt. As a result, Cleopatra committed suicide rather than fall victim to the ridicule of the Romans.

4.    Cleopatra was brought into this world in 69 BC. Her father was Ptolemy XII and her mother was Cleopatra V of Egypt.

5.    When Cleopatra assumed power over Egypt, she succeeded Ptolemy XII Neos Dionysos (Auletes) as the Pharaoh of the Ptolemaic Dynasty. Her reign would last for 21 years , from 51 BC to 30 BC.

6.    When Cleopatra died, she was just 39 years old. Her method of committing suicide was to fall victim to the poisonous Egyptian cobra snake , known as the asp.

8.    There is a great misconception that Cleopatra was Egyptian. The queen was actually of Macedonian Greek heritage, descending from Ptolemy I , a Greek general that served under Alexander the Great. After Alexander died, Ptolemy I became the king of Egypt.

9.    The Ptolemaic dynasty lasted about 300 years and Cleopatra was the only Pharaoh that could actually speak Egyptian. The woman was well-versed in many different languages , nine in all. And while she was attached to the ancient Egyptian title of ‘Pharaoh,’ her main language was always Greek.

10.    Cleopatra is not the only ‘Cleopatra.’ She is actually one of seven women that possessed the name within her dynasty. If you want to officially address the Cleopatra that wooed Mark Antony and Caesar, then you should call her ‘ Cleopatra VII.’ Her full name was Cleopatra VII Thea Philopator.

11.    There is evidence to suggest that Cleopatra was not only the mistress, but may have even been the wife of Julius Caesar at one point. It is known that she took Mark Antony as her husband and may have even had relationships with a couple of her own blood brothers.