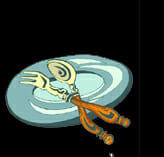 From the way they protected their people to the objects used to eat their food, the ancient Chinese are known for inventing many things that we still use today. In this article, you will learn about some of the inventions of the Chinese that include a weapon, fine clothing material, and eating utensil , and we’re not talking about chop sticks.

During the Neolithic Age, the dagger-axe (called a ge) was created as a stone implement for agricultural purposes. The Longshan culture (3000 to 2000 BC) is associated with this tool, which was also used for ceremonial reasons. When made out of jade, the tool became a symbolic weapon. When the early Bronze Age emerged, the tool was fashioned out of bronze with fewer jade artifacts found.

The dagger-axe was a favorite weapon of the warriors fighting during the Shang (1600 to 1050 BC) and Zhou (1050 to 256 BC) periods. The weapon was made out of a long wooden shaft with a bronze knife blade attached to the end , positioned at a right angle. The user would swing down the weapon or in an inward fashion as a way to hook or slash at an opponent. When the early Han Dynasty (202 BC to 220 AD) arrived, the use of the dagger-axe in the Chinese military had lessened. It was then reserved for ceremonial purposes. Iron spears and other weapons took the place of the ge.

Fashioned out of pottery, the Chinese created clapper-bells that have been uncovered in several archaeological sites. The earliest of these bells have dated back to around 2,000 BC. The culture not only used the bells to create sound, but they also played a role within the culture. As the function and characteristics of bells became more advanced, they were also used to decorate the collars of dogs and fastened to horses and chariots. Examples of early bells have been found in the Daxi site in Yijiashan, Longshan sites at Baiying and Wadian, and at the Majiayao sites in Gansu.

Ancient China developed techniques that produced silk from silkworms, which created a practice known as sericulture. The oldest artifacts associated with silk in China have dated back to the Chinese Neolithic period. They date back to around 3630 BC and were found in the Henan province. When excavating the Liangzhu culture site, items made out of silk were also uncovered. Some silk threads that had been braided into a belt were found, as well as a piece of woven silk. The first known written reference to silk comes from a bronze fragment found , belonging to the Shang Dynasty (1600 to 1050 BC).

Before the Chinese ate their meals with chopsticks, they used a fork. Archeologists have discovered a bone fork at a burial site related to the Qijia culture that dates back to the early Bronze Age. Forks have also been left behind in tombs dating back to the Shang Dynasty (1600 to 1050 BC).