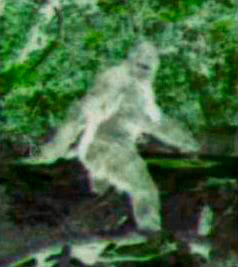 When a witness describes seeing bigfoot, it’s all too often in similar terms that manifest only when seeing a ghost.  And yet the popular school of thought still suggests that the hairy hominid is a physical being walking the wilderness and watching out for others who might witness it.  Some investigators, however, have suggested that Bigfoot could be quite different from what we think when we hear the word.  Maybe the origins of Bigfoot lie somewhere in its history.

Bigfoot, Sasquatch, the Skunk Ape, and Yeti are only a few of the names the creature goes by.  No matter where you go in the world where people convene there are legends of a creature that walks about stalking the shadows at the edge of civilization and even is occasionally spotted by passers-by who dare to venture into its territory.  And yet somehow, despite this, the world at large is still undecided on the subject.

But many of the earliest legends of the creature already suggested that it was more a spirit than an actual physical being.  In the times of 12th century animism, large creatures ranging from the Yvain of Germany to the Iwein of Arthurian lore were written of and even woodcarving depictions showed the creatures chasing the unfortunates who came across them while venturing about their daily lives.

As time went on, eastern stories of a massive creature with unusually large feet were reported from mainland China as well as India, often said to be a spiritual being that could appear and disappear at will rather than a physical creature that lived in our own realm at all times.  Reading the epics and folklore of the time overwhelmingly draws some very interesting parallels to what many Bigfoot accounts depict today.

And let’s take a look at what they might hold in common with modern ghost stories.  They’re often said to appear from nowhere after being reported in the same area that other witnesses have spotted them.  Their appearance comes in waves, very similar to the waves of hauntings that go through long periods of latency.

These “bigfoot hauntings” are often indicated beforehand by the presence of an unusual and unidentifiable smell in the area that sometimes reaches a choking overwhelming level.  They sometimes leave evidence of their presence in the form of tracks or stacked stones, but just as often as not they simply disappear leaving not a single trace behind.

Sometimes, although rarely, witnesses also report a few of the other things that manifest during a haunting by a ghost or poltergeist.  Unexplained static electricity or electrical malfunctions sometimes manifest during a Bigfoot encounter.  People have in the past reported an unearthly luminescence to their environment or entering what feels like a dreamlike state during the encounter.  And there are also the times when witnesses will actually report the creature physically becoming unstable, as though it is not fully part of the environment they are in, but somehow existing here on borrowed time from another realm of existence.  These accounts are sometimes heard and other times never enter the larger Bigfoot lore.

Of course all of these are dependent on written accounts by witnesses or heard second hand through others.  Evidence of Sasquatch sometimes feels very similar to data gathered from ghost hunts.  Is it possible the phenomenon of Bigfoot is not a physical being but rather a wilder version of the spiritual entities we call ghosts?  And if so, what are they ghosts of?