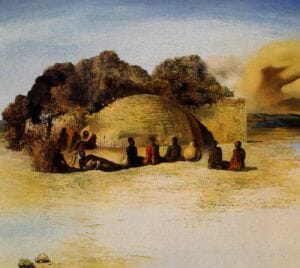 We all have heard accounts of perfectly reasonable people suddenly finding themselves amidst perfectly unreasonable events.  From the phantom hitchhiker to a visit by a deceased relative these ghost stories are staples of our modern lore.  But sometimes you hear a ghost story that seems nothing like the traditional ones of an entity simply visiting a person in a perfectly normal – albeit haunted – room.  Sometimes we all hear stories about individuals who seem to lead reasonable or even mundane lives, but who eventually find themselves in the midst of a catastrophic transmutation of reality.

These ghost stories have no real classification – and this is little comfort to those who experience a trip through hell.

The 1990 film “Jacob’s Ladder” received critical cult status for a number of reasons, but it also was one of the first times outside of experimental media where viewers saw on film a world slowly going mad from the inside out.  Of course it was predated by the experiences of a number of people in the 1960’s who experienced chemically induced hallucinations in massive quantities and significantly larger groups than ever before.  But even these were predated occasionally by stories of people who found themselves no longer in the world as we understand it, but a bizarre almost parody of our world filled with strange and unknowable sinister forces.  Were these similarly hallucinations, or is there some force on our planet that could cause them to experience reality in this most terrifying and unique way?

Throughout the long history of ghost stories ghosts were always something at the edge of our reality where we were safe from them the majority of the time living in an uninterrupted but consistent world filled with all the normal trappings of every day life.  But then something changed.

Just as the characters of horror films moved from the dark castle on a distant hill, so too did the paranormal begin seeping more into our every day lives.  We started hearing of monsters and apparitions that were no longer an exception to the rule, but whose very fibers seemed intertwined with the same physics that keep atomic structures together or let light pass through translucent objects.  To put it plainly, as more paranormal phenomena were observed and we began running out of means to explain them away, we began to see them everywhere.

But then something else happened.  Science itself began broaching the subject of the paranormal.  And as we began unraveling the fine tapestry of Newtonian physics to find out what its very fibers were made of, the world once again found itself in a void-like world where the trees may as well be sentient and much of the understanding we have of the universe collapsed.  The walls were torn down once more.  Even psychology began having unpredictable results.  And of course around this time a number of reality shredding chemicals came about and entered wider use for decades.  The past century has done more to call into question reality as we understand it than all the other centuries combined – notwithstanding the efforts of Renee Descartes.

And so it’s hardly surprising that ghost stories would begin to be told where the subject herself is the traveler into another realm and the strange world around them is just another level of being.