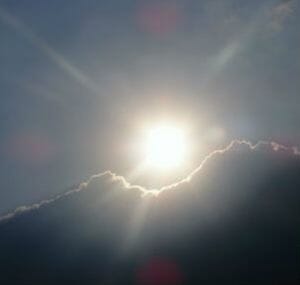 A house that recently made news for having stubborn ghosts that simply would not leave has finally found peace after a third exorcism – at least for now.  After two attempts by a Church of Scotland minister, the strange sounds have finally fallen silent and the mysterious apparitions have vanished.  So why did it take three separate exorcisms, and why did the ghosts respond only the third time?  And will they be back to terrorize this poor family or will the spirits finally rest in peace?

When the Dalkeith family first noticed something unusual going on in their house, they realized they would have to seek help fairly soon.  A man was spotted regularly wandering through their house, sometimes seen standing at the kitchen looking out the window.  Other times the mysterious apparition was spotted wandering the halls or even sitting in the bedroom.  The figure – which caused an understandable amount of fear in the family’s home was always seen dressed in black.  It wasn’t until they received notification from Church of Scotland Minister, Keith Mack, that they finally felt perhaps there was some hope for peace in their home.

But shortly after the first blessing of their house, the apparition returned – stronger than before, as if seeking contact with someone who had once lived there long ago.  Knocking sounds were heard night and day, and soon the family once again called in the minister to provide a second exorcism.  When the priest came around a second time to bless the home, the sounds reached powerful proportions.  The knocking was heard constantly, and the man would regularly appear in the home, turning to face whoever walked in on him wherever he decided to materialize.  The family was now left with two exorcisms that had not worked, and they were at their wit’s end.

Not to be run out of their house, Vicky called up a medium – Jackie Drummond, to look into the matter alongside Midlothian Paranormal Investigations.  Drummond came back telling the family that the ghost belonged to a man dressed in wartime uniform.  He was apologetic, and explained that he didn’t want to cause the family any more trouble, but he was lost.  Not only did Midlothian identify the spirit currently haunting the location, they also identified several others that were hidden just beyond the veil of their home.  Vicky’s house – as they discovered – had been built upon a mass grave containing the skeletons of many children and at least one woman.

Realizing they were dealing with a very specific kind of entity attached to the land, MPI and the medium Drummond were able to guide the spirit to the other side where it vanished.  The ghost seemed at peace at the end, moving on into the mysterious ether between the world of the living and that which lies beyond.

The idea that ghost hunts and exorcisms could fail is a chilling one that has haunted the paranormal community for centuries.  Often multiple exorcisms are required of a specific entity, sometimes from priests or mediums of widely different backgrounds.  It’s unknown why sometimes one form of exorcism works and not the other, but it could very well be the beliefs and preferences of the ghosts themselves.