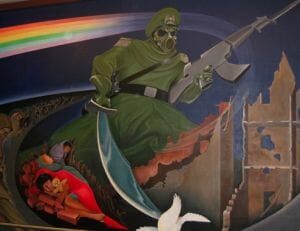 In the Cold War, fears of nuclear devastation all over the globe prompted the building of hundreds of backyard fallout shelters.  But then as the government realized it would have to be keeping vast areas of its infrastructure both safe and organized, it drafted plans to design and build massive vaults to evade the ensuing destruction of everything we know of in our civilization.  But now as the cold war seems like a distant memory it only stands to reason that these bunkers would stop being built.  So why has the building of these facilities not slowed down?  What is this disaster these various agencies are planning for?

As the official story is largely secret, the answer to this question has been a breeding ground for conjecture and speculation.  Why anyone would invest billions on bunkers when world war III seems so unlikely in this globally entangled world of economies, trade embargoes, and currency trading is simply at this point a mystery.  In fact, several of these bunkers have even been supplemented by the 4.5 million seed sample storage vault in the event of a global catastrophe that compromises the world’s food supply.  The massive seed bank will store these seeds for possibly hundreds of thousands of years.  And that’s only one of the more public steps the Norwegian government is taking to ensure life has a chance to survive on our planet.

Many people have speculated that the real cause of all this preparation is likely the oncoming cataclysm that will be brought about on December 21st, 2012.  As this exact date is often used as a cornerstone to all apocalyptic preparation it seems to be the single most often cited cause of global preparation.  And the movie 2012 is only one of several media outlets over anxiety of the date.  But is the highly speculative future apocalypse date the only reason world governments are finding it necessary to prepare for an uncertain future?  Or could there possibly be another reason on top of all of this?

Global politics seems fairly static with very little happening over the course of several years when compared to the vast changes that took place in World Wars I and II.  But if the cables leaked by Internet site Wikileaks gives us any indication, it’s that as the US learns more about global politics and decides to learn as much as possible about the world around it, things are nowhere near as stable as they seem.  In fact, the image many politicians and diplomats have outlined might be compared to a sort of Sword of Damoclese hanging over the heads of every man woman and child on this planet.  Of course in this case the sword itself isn’t as much a sword as the looming and ever present threat of war and possibly even nuclear war.  Given this image of the world it’s slightly more understandable why world governments would find it necessary to prepare for the future when that future is at times less than certain.