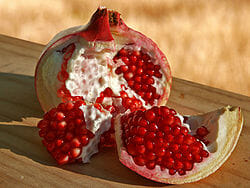 In Ayurveda treatments, is there anything that ginger cannot fix? From relieving nausea to curing indigestion, ginger has a reputation for easing overall discomfort, as well as a multitude of other medical worries. Since the early days of Asia to the medieval times in Europe, ginger has been right by the side of the people , easing upset stomachs, easing the pangs of morning sickness, and aiding traveling sailors suffering from motion sickness.

Research has proven the effectiveness of ginger with medical trials performed at St Bartholomew’s Hospital in London (1990) to the never-ending research concerning the therapeutic benefits of the perennial. Native to Asia, this plant flourishes in the tropics, where the soil is fertile and plenty of rain brings moisture. When preparing ginger for an herbal treatment, the rhizome is washed, soaked, boiled, and peeled , depending on the preparation method and personal preferences.

The rhizome contains high levels of a volatile oil that warms and stimulates the body. Infusions are used to treat nausea, while tincture work on indigestion problems. Other forms of ginger as a natural treatment includes capsules for morning sickness and essential oil for pains and aches caused by arthritis.

This traditional Indian herb is pretty bitter, which is used to treat an excess of pitta (fire) in Ayurvedic medicine. Individuals battling a fever or liver problems often respond to treatments using chiretta. The aerial parts of the plant are gathered during the summer time, when the purple and pale green flowers are in bloom. Since these parts of the plant contain bitter substances, they can be used to treat digestive issues.

For example, one could create an infusion for indigestion by combining Ã‚Â½ teaspoon of chiretta, two cloves, and one cup of water, which is taken three times a day before eating meals. If you are looking to improve your appetite, it is suggested to take a tincture made from chiretta before eating.

At the local grocery store, the pomegranate may look like a simple fruit containing seeds bursting with flavor, but in Indian medicine and other natural treatments of the world , the pomegranate is a traditional remedy for dysentery. Reaching a height of 20 feet, the pomegranate comes from a deciduous shrub or tree that has branches decorated with spines and scarlet-colored flowers. When using the plant for herbal remedies in Ayurveda treatments, it is the rind, bark, and fruit pulp that serves a purpose.

For instance, if you ever come in contact with a nasty tapework infection, the rind and bark of the pomegranate has been seen as an effective remedy. Alkaloids found in these parts of the plant can loosen the tapeworm’s hold onto the intestinal wall. In cases of diarrhea, once again, the bark and rind of the pomegranate proves useful. Other ways to use pomegranates to ease medical concerns is for gas relief and upset stomach.