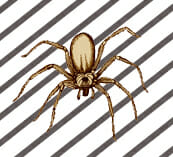 They are known for being creepy and crawly, but some spiders pack a powerful bite that can send you to the emergency room. The world is inhabited with eight-legged creatures that you wouldn’t want to meet up with in the dark and under any other circumstances. In this article, you will learn more about the brown recluse spider , one of those insects that can cause serious health issues.

The brown recluse (also known as the fiddleback spider, brown fiddler or violin spider) is a deadly, aggressive species of spider that possesses a high level of toxic venom. The venom of the spider can cause a great deal of cutaneous injury with tissue loss and necrosis, which means that skin tissue and surrounding elements begin to die after a bite.

When the spider reaches adulthood, it measure 1/4 to 3/4 inch in the body. On the top of the leg attachment region, there is a dark violin shape. The neck of the violin points backward toward the abdomen. While most spiders have 8 eyes, the brown recluse only has 6 eyes arranged in pairs. One pair is in the front of its body with a pair on either side.

In the United States, the brown recluse lives on both the east and west coast. They are especially found in the south. However, the spider also gets its name of being a recluse because it likes to live alone. The spider doesn’t really want to attack humans, as it would prefer to seek out insects for its next meal. It’s when the spider is placed in certain situations that disturbs or frightens it to the point of biting. Interestingly, the brown recluse spider can go without food for long periods of time. It can actually survive up to six months with an extreme lack of food and water.

Recluse spiders lay their eggs a couple of times per year from May to July, placing them in a white silken sac. About 50 eggs are deposited into each sac. It will take one month before the baby spiders hatch from the sac. However, a baby spider doesn’t reach adulthood until one year has passed. In adulthood, the spider lives about 1 to 2 years. Over the course of two to three months, a female will produce several egg sacs.

The spiders enjoy living in dark places and can be found in garages and closets. Sometimes, the spider hides in bedding, clothing and shoes that haven’t been used or worn in a long time. Most people are bitten when they come in contact with the spider under these conditions.

When a brown recluse bites you, you face the risk of what is called loxoscelism. Basically, your skin starts to die. The lesions typically heal within 6 to 8 weeks, but can leave behind scars that last a long time. In the worst cases, painful ulcerative lesion that can reach up to 15 inches in width can develop. Other symptoms to consider include nausea, vomiting fatigue, and fever. The presence of other symptoms and complications can send a person into a coma, and eventually lead to their death.