Across the nation, it is not unusual to come across vandalism that incorporates some of the symbolism associated with Satan or Satanism. However, it is extremely disturbing when such defacement of private and public property involves a place of religious worship. Most recently, the Buffalo United Methodist Church, located in Buffalo, New York, has made headlines for being vandalized with a combination of Nazi and Satanic symbols. In addition to the vandalism, the Union County Sheriff’s Office has reason to believe that the incident at the church may have a link to a double homicide that occurred last week.

Early Tuesday morning, the pastor of the Buffalo United Methodist Church located on Hill Street, arrived at the church, only to find that they had been the victim of vandalism. The walls were spray-painted with Satanic phrases, such as “Christ is dead, Satan is alive.” Swastikas, a common symbol associated with Nazis and the KKK, had also been left behind. In addition to the defaced walls, some of the church furniture had been damaged, and Bibles had been ripped apart.

So, why is the vandalism of the Buffalo United Methodist Church being considered a possible puzzle piece to a recent homicide? It has something to do with the physical characteristics of one of the suspects arrested for the killing of Charles Marvin Parker, 59, and his wife, Gretchen Dawn Parker, 51. The couple was murdered in their own home in the Jonesville area on July 21. The two people charged by the sheriff’s office for committing the crime was Jeremy Lee Moody, 30, and Christine Susan Moody, 36. Their list of charges include two counts of murder, two counts of kidnapping, two counts of possession of a firearm during the commission of a violent crime, as well as two counts of first-degree burglary.

A number of racist tattoos decorate the body of Jeremy Moody, who has the word ‘Skinhead’ appearing on the front of his neck. The base of his neck is home to a Nazi emblem, as well as a swastika. During a session of questioning, Moody did make claims that he is a part of a white supremacist group. The church had both Satanic and Nazi-related symbols spray-painted on the walls. 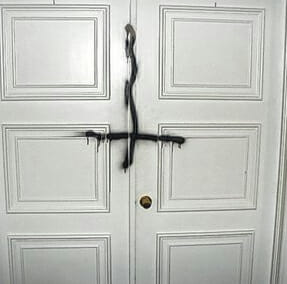 One of the Satanic-related symbols found on the walls of the church was a pentagram, which usually appears with two points up in Satanic circles, unlike the symbol left behind. The Satanic symbol is viewed as evil, dark, and representing the Devil. As a side note, the pentagram is also a symbol that is embraced by Freemasons. Another symbol that appeared on the walls of the church was an upside down (or inverted) cross, which is often used by Satanists to mock the cross that Christians and other religions use in prayer and the worship of God.

This week, Buffalo United Methodist was supposed to hold Vacation Bible School on the premises, but had to relocate the congregation to another church for services. The cost of the damage had not been estimated as of yet, since a great deal of damage required the processing expertise of SLED Forensics, the cost is sure to be quite high. Interestingly, it was reported that there were no signs of forced entry.