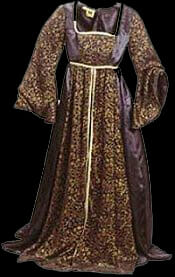 With a variety of historical events and wars taking place, the medieval age lasted between the 5th and 15th century BC. The clothing worn during this time indicated a person’s place in society. Therefore, the nobles and peasants clearly dressed in different fabrics and styles. In this article, you will learn some of the threads worn by the ladies of medieval times.

A slender linen undergarment (or shift) with long, narrow sleeves was a popular garment worn during medieval times. At the time, linen was highly expensive and women belonging to the poorer class could not afford it. They wore wool close to their skin. Woven stockings were also worn, which were cut and sewn to fit the legs. Wool strips served as the material for knee garters, which held the stockings in place.

A long woolen gown was placed over the shift. The class of a woman determined the embellishments and quality of the dress. Medieval styles centered on bright, vivid colors featuring shades of blue, green, violet and yellow. A variety of dyes were used to achieve this look. However, only noblewomen were able to enjoy brightly colored clothing and it was the color of a garment that set different classes of women apart.

During the 5th and 6th centuries, women slipped into gowns made out of uncomplicated sheets of fabric that were fastened at the shoulders with the help of a decorative brooch. The late 7th century brought newer styles of gowns, such as dresses that went to the ankle and had wide sleeves that showcased the elbows. These garments had to be slipped on over the head. Wide bands of contrasting colors added pizzazz to this type of gown. Contrasting colors of the cuffs, collars and hem began to appear by the 11th century, where gowns started to take on a more tailored approach. Women also started to abandon their girdles.

In order to generate a closer fit with clothing, tight lacing was incorporated in women’s clothing to make the waist appear smaller. This was a trend that started to appear by the end of the 12th century. Women also put on cloaks embroidered with features, as well as decorated with trimmings made out of gold, silver and copper.

However, all of these advancements in fashion during medieval times accommodated noblewomen and did not benefit the poorer classes, who were subjected to rough tunics fashioned out of wool. When the late medieval period arrived, women started to cover their faces with veils and adapted to throat coverings called wimples.

Other facts concerning the clothing that women wore during medieval times include: