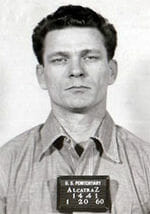 Out of all the escape attempts from Alcatraz Island, three men (Frank Morris, John Anglin and Clarence Anglin) came up with the most successful plan. They intricately planned their escape and put it into effect on June 11, 1962. In this article, you will learn how far they got and what they did.

Frank Morris, John Anglin and Clarence Anglin were housed in cells on Block B of Alcatraz Island. This is the place where escapees were kept. It was an unguarded area that measured 3 foot wide in a utility corridor. However, moisture damaged the concrete to the point that the prisoners were able to chisel away the material around an air vent that led to the corridor. A metal spoon soldered with silver from a dime was one of the tools used to make their escape. They also used a stolen vacuum cleaner motor to fashion their own electric drill.

They worked on the wall during music hour , when accordions played and helped drown out the noise. False walls were used to hide their progress. Since their cells were so dark, the guards did not detect their activity. The inmates planned to use an escape route that led up an air vent. The shaft was large enough for a man to climb through. Carborundum cord was stolen from the prison workshop. The prisoners had removed the rivets from the grille and substituted fake rivets made out of soap. Stolen raincoats would be used to make a raft as they made their way to the mainland. After leaving behind “heads” made out of paper mache in their cell bunks, the men made their escape. It is thought that the inmates entered San Francisco Bay at 9:30 p.m.

The FBI were called in to investigate the case. They collected information from another prisoner named Allen West, who was supposed to be a part of the group, but had been left behind. West had used cement to hold his false wall in place, which had been slipping, but unfortunately for him , it set and he could not get out. The Angelin brothers decided to move forward with the plans and West desperately tried to chip away at the wall. By the time he had made it through, the escapees had already left.

Plywood paddles and parts of the raincoat raft were found floating in the bay. The official report regarding the incident stated that the prisoners drowned in the coldness of the bay waters before reaching the mainland. However, sightings of the men have been reported. Friends and family of Morris and the Anglins claim that they have even received postcards that were written in handwriting that matched the men. Despite claims that they could not have made it across the waters, the U.S. Marshall’s office still investigates the case, which will remain open until the men reach their 100th birthday.