Vamping it up for the cameras and wearing seductive clothing increasingly seems to become a standard for females throughout the entertainment industry. However, in the case of British singer-songwriter Rita Ora, there are a few clues that would lead one to believe that she may have very well fallen into a trap in her quest to achieve notoriety as a musician. Interestingly, the man behind her career may explain a lot regarding her growing presence within the music world.

Before Ora’s first album (a self-titled project) was released in 2012, music execs flooded the market with her photo and name before she even had a chance to prove her true potential in the industry. The album reached the number one position in the United Kingdom, and out of it came two number-one singles, ‘How We Do (Party)’ and ‘R.I.P.’ which was popularly received in the United States as well.

Ora’s first official entry into the entertainment world led to being recognized for producing the most number-one hits on the UK Singles Chart the year of her debut album. She was later nominated for three awards at the 2013 BRIT Awards, including the Brit Award for Best British Breakthrough Act.

So, who is the mastermind behind the marketing of the British artist who has also made an impact on the American music listeners? It’s none other than Jay-Z and Roc Nation. The man whose logo and hand symbol representing his music enterprise, clothing ventures, and now sport agency is a triangle that represents an illuminated pyramid. To make matters worse, the sign is often flashed with people looking through it – the eye that appears at the top is associated with the all-seeing eye (Eye of Horus).

Ora’s manager is the person responsible for getting in touch with a representative of Roc Nation, and telling him about her client. The singer was asked to fly out to New York where she met with Jay-Z, who signed her within 48 hours of her arrival in the United States. She joined the Roc Nation roster in December of 2009. She would start out making appearances in various music videos, such as Jay-Z’s 2009 ‘Young Forever’ (interesting), and Drake’s ‘Over’ video in 2010. She was also featured in a commercial for Roc Nation and Skullcandy Aviator Headphones.

Is it a wonder that Ora is suspected of following in the same path as fellow label mate, Rihanna, who is often seen as a Illuminati-related puppet? Also, it’s a bit intriguing that the song ‘R.I.P.,’ which was written by Drake, was originally penned for Rihanna.

Sex kitten programming is one of the three levels of Monarch mind control referred to as ‘BETA,’ and there are distinct references and symbols that are used when a woman undergoes such treatment to become a ‘sex slave’ or ‘sex object’ In Rita Ora’s case, we see the oversexualization of her appearance in photo shoots and public appearances throughout her career, but she has also on more than one occasion embraced the cat-like qualities and symbolism associated with this type of programming – namely wearing animal cat print clothing, such as cheetahs and leopards. At one point, Ora just decided to pose in a dominatrix-looking cat mask for a photo (as shown). 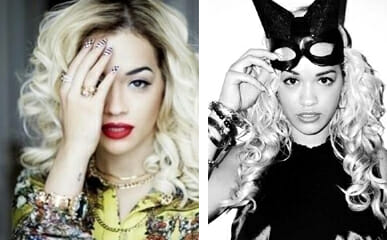 We see that for Ora’s album, she adapted the single-eye symbolism often seen in the entertainment world. When captured in photos, she may use her hand to cover one eye, or intentionally close one eye. In other promotional materials, Ora is pictured in a way that suggests dissociating personality or the possible presence of an alter (alter ego), which is often linked to MK Ultra activity. The mirrored imagery and reference to duality pictured is just another way to make reference to fractured personality. Notice in the one single-eye imagery photo that one of her fingernails is painting in a black and white checkerboard print – could this be a sneaky way of incorporating a reference to Freemasonry?

As her career continues to escalate, Ora has been a pretty busy girl, and she’s only been signed with the Roc for a few years. Most recently, she was a guest judge on the ninth series of The X Factor in the UK, and she’s also confirmed that a character in the upcoming The Sims 3: Seasons will be in her likeness.

It will be interesting to see if she crashes and burns, like other suspected puppets of the industry.