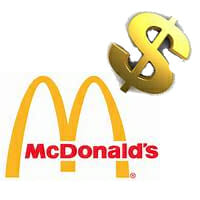 Some of the identifying qualities of people and businesses thought to belong to or work with the Illuminati is wealth, power and influence. Corporations that fuel big business are in a position to affect the livelihood of individuals and families on a widespread level. McDonald’s is certainly an influential company when it comes to the food industry, and over the years, the company has come under fire for some of its business practices, methods of marketing, and menu choices. So, why do some people feel that McDonald’s is in cahoots with the Illuminati?

McDonald’s makes a lot of money selling ‘fast food,’ which means cheaply made products are delivered at a quick rate. In order to accomplish this service, not all ingredients, preservatives and other components found in the found have been deemed the healthiest. Some people have taken to media outlets ”“ from news programs to You Tube videos ”“ to share their experiments about McDonald’s food. One woman carried around a McDonald’s hamburger and fry for at least four years that showed no normal signs of aging. Morgan Spurlock conducted his own experiments on popular McDonald’s foods, such as the Big Mac, chicken sandwich, and the fries, which the latter did not show any signs of aging in more than 11 weeks.

Such experiments are a warning to the public that McDonald’s isn’t serving the healthiest of foods, and doesn’t have the best interest in mind for the public. If the fries take that long (if ever) to break down on its own ”“ what exactly is it doing inside the human body? Besides contributing to high cholesterol levels, heart disease, and sky-rocketing obesity levels, the company’s food and business practices has a health reach that stretches across the globe. McDonald’s is one of those wealthy corporations that have invested in a great deal of land tracts on foreign soil in poor countries. Farmers who once grew food for themselves are sometimes forced out by the elite and military so that they can make a lot of money selling the land for profit.

In the meantime, McDonald’s continues to grow wealthier while the land is used to produce their ingredients and fatten cattle for beef products. Their actions do not benefit the people that actually live in the region. They usually wind up starving while the food cultivated right in their own backyard is exported to other countries, like the United States. In some reports, food that could go towards feeding the starving poor actually goes towards bulking up the cattle that produces some of the meat exported to America and other locations.

Many feel that McDonald’s is a powerful corporation that continues to get richer while the poor suffer the repercussions ”“ both economically abroad and physically in the West. When the use of ‘pink slime’ and ammonium hydroxide in their hamburgers and chicken nuggets hit the news not too long ago, more of McDonald’s poor food and business practices were exposed. Chef Jamie Oliver pushed for the company to put an end to its use, and it worked. This incident also shed light on the less than favorable food standards of the United States as compared to other countries that state they use 100% beef. In the U.S., McDonald’s has a reputation for doing anything to make a ‘buck.’

Just how bad has it gotten?

There are actually some countries that advertise that they do not sell USA-produced beef.