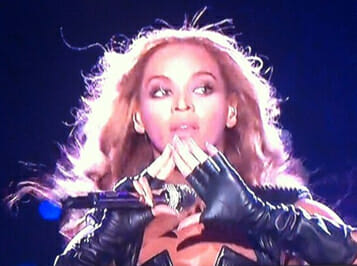 Before Beyonce even took to the stage to perform during halftime at the 2013 Super Bowl in New Orleans tonight, she had already caught the attention of viewers, who wanted to scrutinize her vocals and highlight any misstep. Past halftime shows for the Super Bowl have created a wave of controversy ”“ from the nipple slip of Janet Jackson years ago to the suspected Illuminati-connected Madonna’s performance of the previous year. All eyes were on Beyonce tonight to see what kind of hidden messages or symbolism she would incorporate into her show.

By now, many people have become increasingly more aware on how to pinpoint the symbolism associated with the Illuminati and other secret societies. For Beyonce, one of the most blatant displays came from one simple action of the songstress, who deliberately formed a triangle with her hands right in the middle of her performance. Of course, her husband Jay-Z’s logo for ‘Roc-a-Fella’ records and other business ventures resembles the same sign symbol. She could have very well been sending a personal shoutout to her husband while on the stage, but then again, he too is a suspected associate of the Illuminati. This curious symbol has many people wondering, and people on Twitter and Facebook quickly jumped at the chance to voice their concerns.

However, this blatant act was not the only questionable part of Beyonce’s performance. 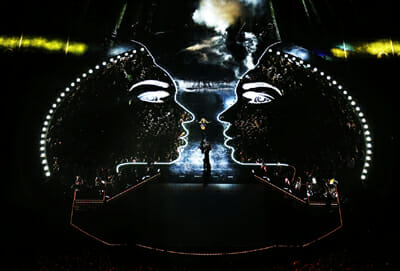 Part of Beyonce’s stage design incorporated the illuminated mirrored images of what appeared to resemble her own facial features. The eyes are quite distinct and give an eerie resemblance to some of the early depictions of the Eye of Horus seen in ancient art. In the beginning, this part of the show is white, but later on, it changes color to red. At one point, Beyonce is dancing on stage with light surrounding her body. The imagery can be interpreted in many different ways. The dancer’s legs seem angled in such a way that it looks like black sun symbolism. The red center of the illuminating white exterior on the stage with Beyonce in the middle also gives off a hint of Illuminati symbolism. 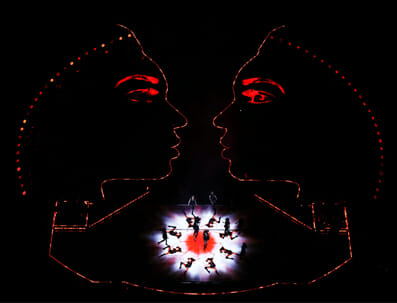 Part of Beyonce’s performance made use of a digital screen that delivered a mirrored image of Beyonce playing the role of her backup dancers during a sequence. Mirrored imagery and dualism are both concepts that play a role in Illuminati symbolism.

In another part of the show, the digital screen later shows what appears to be another nod to single eye symbolism and the Eye of Horus in red. Beyonce appears in the center.

Interestingly, following Beyonce’s performance, the Superdome suffered an outage that affected lights within the stadium, some cameras, and various pieces of audio equipment. Power was lost for about 35 minutes before it was gradually restored to affected parts of the stadium.

The power company denied responsibility. A spokesperson for Entergy New Orleans, which provides power for the stadium, released a statement that: “All of our distribution and transmission feeds going into the Superdome were operating as expected.” The power company said the outage began with a failure in equipment run by Superdome staff, which declined to release a statement.

Social media outlets were alive with theories as to why part of the Superdome went dark, which ranged from ‘doubting the power of Beyonce’ to her halftime show draining all of the power to her suspected Illuminati connections playing a role in creating darkness.