This image from the microscopic imager instrument on NASA’s Mars Exploration Rover Spirit shows a feature called “String of Pearls” that resides within the area dubbed “Hanks Hollow.” The “string” consists of a set of bright spots. These are the partially exposed interiors of rocks that were broken-up when Spirit’s wheels roved across this surface. Scientists believe the rocks exposed in Hank’s Hollow may have been generated or modified by water-rich fluids. The image was taken on sol 177 (July 2, 2004). 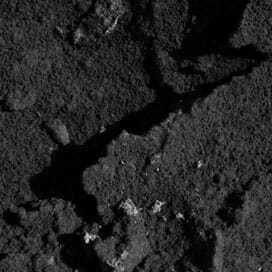 Using its left navigation camera, the Mars Exploration Rover Opportunity sought to capture some clouds on its 153rd sol on Mars (June 28, 2004). The presence of morning clouds in the area of Endurance Crater was established by spacecraft orbiting Mars. Mars has three kinds of clouds: dust clouds low in the atmosphere; water clouds near the surface up to heights of 20 kilometers (about 12 miles); and carbon dioxide clouds at very high altitudes