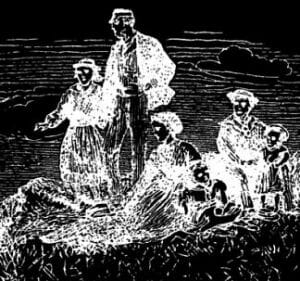 When we look at the preparations that several individual believers in a coming cataclysmic event have made, several will chronicle the list of preparations they have been making by saying they have stockpiled different individual supplies.  And yet this material element of any major shift to humanity leaves a vast hole in the very heart of the matter.  At the end of 2012 as humanity enters a new age there may be a need for individuals to care for their families and prepare them, but there will be a whole new element that is all to often lost.  And it is this preparation that is absolutely the most important.

In all situations we enter, we carry several different things with us.  This luggage that we carry on our journey can come in the form of several different things.  There is the food or fuel we use to sustain ourselves, the tools we use to conquer tasks, the friends and colleagues we walk side by side with and our loved ones.  But there is also an element we are often unaware of.  This element is the only thing we have with us from beginning to end and never lose until our journey has ended.  We ourselves are the greatest thing we can guarantee will be there as 2012 turns to 2013 without exception.  And when it happens that way, whatever shift may come with us may rob us of any number of the tools we surround ourselves with or even interrupt the supply of food we use to sustain ourselves.  But one thing that we will never have interrupted until our final day is our own consciousness.  And it is this consciousness which is the greatest preparation we must make as the Earth changes and shifts into a far different realm.

When technologists have looked at the past year and then projected into the future, they often will state in wonder that it is an incredible coincidence that so soon, when technology is taking such a massive shift forward that we are starting to see an intense shift in consciousness as well.  Though for decades it has been difficult to keep a society’s culture walking in step with the tools it creates – often taking decades to catch up socially to technologies that can have far reaching impacts on the lives of those using them.  And yet with the approach of 2012 one of the greatest tools has been utilized to spread a wealth of understanding about world events and shift humanity in a positive and open direction.

But what preparation should we stockpile?  What mental barricade should we be building up to bolster our courage and fight off whatever chaos may follow?  It is, in fact, a trick question.  The barricades should not be built up but rather broken down.  As we search within ourselves for the answers we must look to the wisdom of the very Maya who first carved the calendar from stone to be found by future generations and the Hopi who predicted centuries ago the changes we are already seeing today.  As we distinguish ourselves from all other previous incarnations we must learn to open our hearts and remove words we always lived with since the dawn of civilization.  One of the tools we have shouldered bravely for so many years is known as ‘struggle.’  And this word, when we free ourselves of it, will prove to be even more useful in its absence than it was when we employed it.  When we perform all actions as a self actualized spiritual individual, this word can finally be given a context.  And when we see it is not the only way, we can begin to truly live.  And 2012 as a date will not be a point of fear, but can rather be a time of positive change and transcendence.  And we will need that tool and others to prepare for what else is to come.