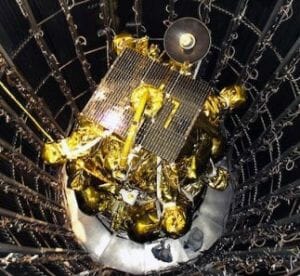 The word “grunt” in Russian means “ground.”  But when the ill fated Phobos Grunt was launched in December of 2011, no one knew how quickly the $163 million probe would be grounded permanently.  But as speculation over the device’s fate increases as it slowly spirals back to Earth, a few are questioning whether the Grunt could have been shot down or in some other way sabotaged.  But what was Putin referring to when he said he knew there were powerful secret weapons that could have shot it down?

No doubt several countries have secret weapons far in advance of our current understanding.  Throughout the history after the Cold War there has been an air of secrecy surrounding weapons technologies, but those have generally come in the form of faster aircraft, more difficult to detect submarines, and more powerful bombs.  But in recent years speculation over other types of weapons, including energy and wavelength based weapons has come to the attention of many conspiracy theorists and world interests.  But it’s difficult to determine how much of this is genuine and how much might be disinformation intended to deter foreign intelligence agencies.

But Putin expressed concern over the fact that several of the country’s orbiting probes were lost as they reached orbit on the other side of the planet where they would not have direct links to them.  And as this latest device disappeared, it seems more than a few people were asking if it was all just a coincidence – or if there was some other force at work.

Of course in the long list of things that have gone wrong for Russia while examining Mars’ moon Phobos, they’d have to first look back to the first probe failure back in 1989 when the Phobos II probe photographed an object fast approaching that looked to witnesses on Earth eerily similar to the UFOs photographed around the world.  And while the incident remains one of the biggest mysteries in the Russian space program today, some have suggested it could have been nothing more than a photographing error that has as of yet been unexplained.  Russian conspiracy theories at the time, however, included references to a manned American base somewhere in orbit around the hollow moon.  Since then scientists have confirmed that Phobos’ interior is indeed porous, but not necessarily hollow in the way speculation at the time suggested.

But what was Putin referring to when he said he knew of powerful weapons that could disable spacecraft in the way the Mars Grunt disappeared?  But analysts suggest any military action against a simple peaceful scientific probe like the Phobos Grunt just doesn’t add up in some ways – simply because it was supposed to be a purely scientific mission rather than a military one.  Why risk the political upset over something so trivial as Phobos rocks if there is nothing hiding on the tiny moon – or beneath the surface?