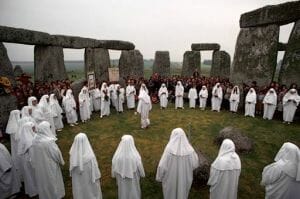 Constructed without the use of draft animals and shaped by stone tools, Stonehenge was erected many miles from the quarry from which the stones came.  Stonehenge although sadly neglected over the years is not forgotten.  Its mystery lingers to haunt us still. It is an amazing feat of engineering.  What manner of ancient man would want to build so curious a monument?  And why? And how would he he have gone about it without our modern machines?

The tribal lore of old Britain provided histroy with the color if not the truth of Stonehendge.  The earliest claim was that of a temple erected by the medieval wizard Merlin to commemorate noble British warriors slain on that spot by the Saxons.  Curiously, Merlin was said to have used earthly powers, not magic to transport those stones to the construction site.  The Merlin theory began losing favor during the 15th century, when the anonymous auathor of the Chronicle of England stated for a fact that there was no connecton between teh medieval wizard and the building of Stonehenge.

Twentieth-century diggings have yielded reliable evidence that the ruins of Stonehenge date, not from Roman times, but from as far back as the New Stone And Bronze ages.  They are nearly as old, then as the pyramids of Egypt, older than the rubble of fallen Troy.

Most likely Stonehenge was not buildt all at once.  It was constructed, it seems, in three stages, beginning as early as the days of Abraham.  Completion extended over a period of several centuries, probably from about 2000 to nearly 1400  BC.

The structure of Stonehenge is actually laid out on the line of the midsummer sun rise and the midsummer sunset, the longest and the shortest days of the year, and it seems likely that Stonehenge was built to mark these two events, which would have been enabled people to chart the changing seasons.  Gerald Hawkins, a Professor of Astronomy, concluded in his book "Stonehenge Decoded" that Stonehenge was a sophisticated astronomical observatory designed to predict eclipses.  The positioning of the stones provides a wealth of information, as does the choice of the site itself. If you can see the alignment, general relationship, and the use of these stones then you will know the reason for the construction. The author, and other astronomers, discovered the 56-year cycle of eclipses by decoding Stonehenge!

So, Stonehenge was a computer, and this computer would need resetting about once every 300 years by advancing the stones by one space.  Mankind generally used the cycle of the moon as a unit of timekeeping.  Every year on the first day of summer, the Sun rises at a point that is farther north than on any other day of the year.  At the ruins of Stonehenge this solstice sunrise appears on the horizon in direct alignment with a massive eroded pillar of rock called the Heel Stone.  Legends of the Devil striking a "Friar's Heel" with a stone resulted in its exotic name.  It seems that the Heelstone serves the same purpose as the hands on a clock, but this ancient clock runs backwards.  It is a countdown clock.  But, countdown to what?

Why would eclipses have been so important to the ancient people of Stonehenge? Perhaps they considered the darkening of the Sun or the Moon a fearsome event -- a celestial omen of doom or disaster. Many cultures have interpreted eclipses this way. But the sophistication of the astronomy of Stonehenge suggests that the builders had something different in mind. Their understanding of the solar and lunar cycles must have led to a high regard for the cosmic order.

For most parts of the year, the sunrise can't even be seen from the center of the monument. But on the longest day of the year, the June 21st summer solstice, the rising sun appears behind the Heel Stone, creating the illusion that it is balancing on the stone.  The Heel Stone sits along the Avenue, that extends from the northeast corner of the main monument.  The rising sun creeps up the length of the rock, creating a shadow that extends deep into the heart of five pairs of stone trilithons - two pillar stones with one laid across the top in the shape of a horseshoe that opens up towards the rising sun.

Just as the Sun clears the horizon, it appears to hover momentarily on the tip of the Heel Stone.  A few days later, on midsummer's day, the sun will appear once again, but this time, it will begin to move to the right of the heel stone.  The countdown to doomsday has begun.  The same phenomenon happens again during the winter solstice, only it's in the opposite direction and at sunset.

In a few years (2012) due to the wobble of the earth on its axis and certain other important alignments, the giant Heelstone will no longer cast its shadow within the circle of stones.  It will mean that time has run out. 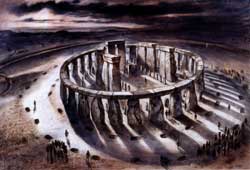