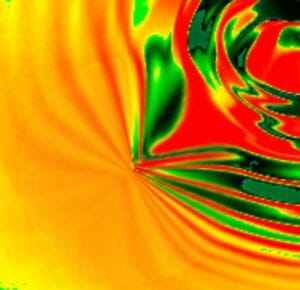 Is invisibility possible?  A number of research teams around the globe are actively seeking a meta-material that will finally allow light to bend around an object and make it invisible.  But one new concept of invisibility will not likely work as well for the military as it will for scientists looking to apply the new method to studies of magnetism, computers, gravity, and higher resolution microscopes.  Meanwhile, research in the more traditional “metamaterial” allowing invisibility on the larger scale continues to make improvements.

The method has successfully blocked out a portion of space from microwaves to make it appear as though it doesn’t exist at all, bending even magnetic waves around the area.  The method may not have quite the same impact as an invisibility cloak for military vehicles, but it would certainly help scientists looking to closely scrutinize extremely small objects – which could help in the field of computer design.  As microchips get smaller, design will have to happen on a much smaller scale – meaning scientists will have to become better acquainted with the interactions of different forces – like magnetic waves on that scale.  The three dimensional object cloaked will paradoxically allow scientists an opportunity to look at incredibly small details with unparalleled success.

But of course the research that has captured the public’s imagination is the development in the field of metamaterials that would bend light around an object and then emit it on the other side – making the object appear as though it were not there at all.  In order to understand the principle behind how invisibility works with these materials, imagine light and color traveling through something similar to a fiber-optic tube, but on a very small scale.  Essentially the light enters through the tube and is then channeled out the other side in such a way that the entire person or vehicle enclosed within has been bypassed.  One downside of the material is the fact that a person would be unable to see while enclosed within it.  Additionally, the material would not stop other forms of recognition such as heat generated, meaning infrared cameras would still be able to detect a person.

But there are also many unseen applications to the technology as well.  While the material may be useful for allowing people and vehicles to move about undetected, it could also serve as a means of creating incredibly strong windows – if the material were applied to a slab of titanium – for instance – and then placed on a bank vault allowing patrons of the bank to visually confirm that the money was indeed present.  Scientists could also use the material to allow them to look in on high pressure environments such as nuclear reactors which would ordinarily require extremely thick glass.  And rather than breaking, the materials would simply darken in the areas that were damaged enough to cause the metal to stop conducting light correctly.