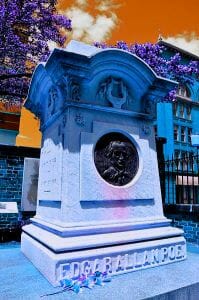 Edgar Allen Poe, the legendary writer and inspiration for much of the past two centuries’ horror style was a man of much talent himself.  But one of the macabre mysteries of his death has been the sudden appearance of a figure who once a year appears to pay him tribute at the site of his grave – before vanishing into the night himself like one of the characters of Poe’s stories.  But this year as crowds gathered around to watch the Poe visitor appear and pay his homage, the dead of night yielded no such visitor.  Has this long time tradition gone away forever?  And will the mystery ever be solved?

Edgar Allen Poe was first visited by the mystery figure some time during the 1930s when a tell-tale cognac bottle and three roses appeared on his grave stone on the poet’s birthday just shy of a century after his death.  Witnesses soon started gathering around Poe’s grave in Baltimore on January 19th and wait to see the mystery figure as he toasted Poe  carrying a cane with a silver handle and wearing a wide brimmed hat to obscure his features and a white scarf over his face.  The ritual went on undisturbed even as witnesses arrived to watch after the figure annually as the tradition continued.  Over the years many wondered how someone could carry a tradition with one figure over several generations.

The strange custom was filled with ritual and symbolism.  It was believed that the cognac was symbolic of a tradition that had been passed down in the family’s tradition while the roses themselves represented Poe himself, his wife Virginia, and Maria Clemm who were all once buried there.

But where did the toaster go?  Why was this tradition so suddenly ended?  Who was the mystery figure and how was the tradition kept so long without being interrupted?  The contemporary opinion is that all good things must eventually come to an end eventually – with or without the fanfare they are due.  And the tradition of the Poe toaster did not seem to be any exception in 2009 when reporters and enthusiasts gathered around the site looking for him to appear, but saw nothing.  In 2010 it was expected the tradition might resume, but it did not.  By 2012 it was widely accepted that the tradition of toasting Poe’s grave, for reasons unknown, ended just as mysteriously.  But witnesses did still appear at the graveyard where Poe was buried, and those with high hopes still waited in vain for the figure with the large hat to appear and celebrate Poe’s brilliance once more.

But in its own way, the tradition did not die.  The January 19th event was often seen as an opportunity to celebrate the works of a man who wished to share his own terrifying vision of the world and disrupt the status quo in a time when the horror genre was still in its infancy.  Poe has been listed as the inspiration for dozens of famous writers including Sir Arthur Conan Doyle who openly stated that the now iconic Sherlock Holmes was based on C. Auguste Dupin – a character first penned by Poe in the story The Murders in the Rue Morgue and the Purloined Letter.  In the end, just like Dupin the mythology of Poe has expanded substantially even spawning its own traditions and figures of mystery.  In the end, it seems while we may be sad to see this tradition end, Poe will always be celebrated in one way or another.