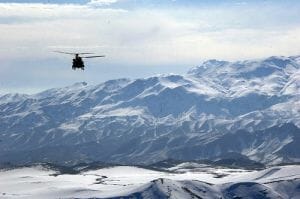 When you start watching the video it looks like a simple target shooting lesson.  But when you start hearing helicopters and looking into the distance in the last half of the video, it becomes apparent that something unusual is going on.  Though this video has not seen much mainstream attention, it has gone viral in some cryptozoology circles.  And the same question that keeps coming up is, "Who was in that helicopter, and were they hunting Bigfoot?"

The video shows a family teaching their child to shoot rifles at a series of targets.  Eventually the youngest of the group trades in his hunting rifle for a shotgun.  After he fires, you can see something in the distance suddenly take off running across the hill at tremendous speed.  And the physiology of the creature depicted has some cryptozoologists under the impression that a Bigfoot was caught on film.

The first question many people have when viewing this video is why did the creature start running so suddenly when a rifle was being fired several times before.  For this we asked a few gun experts who identified the rifle as likely a .22 caliber.  The .22 is a very small bullet and it makes a much smaller popping sound.  As a result, the creature may have heard this as only a distant tiny sound overwhelmed possibly by the sound of the helicopter.  On the other hand, the shotgun would have had a much louder report.  This could have startled the creature into thinking something was coming for it and made it start sprinting in the opposite direction.

One of the things skeptics in this video point out is that one of the men in the film appears to look directly at the creature.  However, at the distance it was at this would have been fairly difficult to determine given the angle of his face.  And there is another person next to him in the direction he was looking.  It is entirely possible he was just looking at this other person rather than actually looking at something in the distance.  And if this were the case, then this primary argument against the film would immediately be called into question.

Of additional interest is the fact that a helicopter can be heard droning in the background throughout the film.  While the conclusion that the helicopter was "hunting Bigfoot" may be a bit premature, it was one of two unusual things that was present throughout the film.  And as the footage unfolds, we can guess that the helicopter may have been able to at least see the creature even if it was not necessarily there for that reason to begin with.

And of course there's also the possibility that this might just be a person wearing an ape costume who just happened to be in this mountainous area for reasons unknown.  Of course when your explanation depends on a person randomly walking around the mountains in an ape costume, arguments tend to deteriorate from that point fairly quickly.