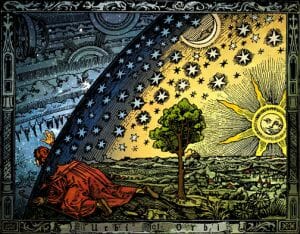 Just how far does a skeptical mind go when dealing with subjects like the paranormal?  The question seems like a simple one, but in looking at skeptical responses to events of various natures, it seems skeptics will go very far to explain away a seemingly extraordinary event and make it into something a bit more comfortably mundane.  So often in the paranormal community we’re led to believe the words “reasonable explanation” are analogous to “non-paranormal explanation” no matter how strange they may sound.  And more often than we’d care to admit these “reasonable explanations” are in themselves quite unreasonable.

Let’s take an event of some controversy and look at it through the scrutinizing lens of history.  Though history will remember 1969 as the year mankind first walked upon the Moon’s surface, there are several with legitimate questions about the subject.

It seems in this case the skeptics of the mainstream have traded places with the so-called crackpots in suggesting there must be some explanation for how the world came to believe man had walked on the moon rather than simply faked the whole ordeal as a high budget hoax.  In fact, the few images could have in fact been faked if the entire mission and all funding had been expropriated to create such a massive hoax.  Put in context, the idea that we could have landed on the moon in a small rocket ship seems fantastic when we don’t have a body as large as the government behind it defending the theory.  And so it’s just as reasonable to suggest this “burden of proof” would be on the shoulders of the claimant suggesting such a fantastic thing had taken place.

In fact, after the human race reached the moon’s surface they returned and visited several times, rarely being questioned and never coming under the same derision as those influenced by the cultural perception of UFOs or ghosts commonly associate with those phenomena.

And so the concept of skepticism appears to be less about objective facts than about who you choose to agree with and trust.  So if this is the case, is all we understand about the world and its scientific achievements nothing more than a series of alliances of fact and perception?  And how far will these alliances go to disregard scientific evidence when the truth appears to not coincide with popular opinion?

Let’s take the plight of Copernicus under advisement.  Before his death in 1543, Copernicus had endured many years of steadfast disapproval by his peers when he suggested it was possible that we were living in a Heliocentric star system where the Earth was but a small dot orbiting a massive sun at the center.  And all those who told him he was mistaken in thinking the Earth was not the center of the Universe were wrong despite sharing a healthy majority with one another.

Despite the fact that discoveries such as these have been forthcoming since the dawn of time, each new generation is just as certain as they are that skepticism in relation to any opinion deviating from the accepted norm is representative of objective truth, time and time again they are proven wrong.  And so what conclusions can we draw about the current model of Earthly understanding where once again the Earth is the sole center of the universe in another way, with the presence of life?