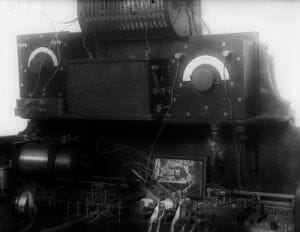 When a winter storm rolls through and kills electricity on a block or even throughout a whole city it’s a mystery easily solved when a downed power line or damaged transformer is discovered.  But in Kingsclere, Hampshire the real cause is a bit more difficult to discover as the number of devices affected has spread even to remote control key fobs and cell phones.  What’s the disaster causing devices in this small village to be disrupted even when they have power going to them?  And has this sort of thing happened before?

Residents of Kingsclere were expecting the holiday season to come and go without incident, but it would appear after several days of disrupted electricity that their devices simply were somehow being interfered with.  And as residents called in a legion of repairmen to fix various seemingly unrelated failures of their appliances, more than a few began questioning whether there may be a central cause bringing it all together.  But as they examined the case further, it seemed the failures were becoming more pronounced as time went on.

The only common factor that those investigating the matter have been able to piece together is the presence of radio frequency identification chips (RFID) on many of them – which makes one cause for the failures come to the front of one theory.  RFID devices communicate in a very slim radio band, which means errant electromagnetic waves could affect them.  RFID uses information carried along the same electromagnetic spectrum as radio, television, microwaves, and nuclear radiation.  The thing that keeps the information separate is the frequency at which it operates.  So is it possible a single badly wired transmitter could be leaking radiation into these spectrums and then overpowering smaller devices?  And if so, what could the cause be?

The mystery has some residents pointing to the nearby television transmitter in Hannington.  The Hannington transmitter could in theory be the cause in a rare mix-up somewhere within its vast array of components, but after checking the transmitter it appears the explanation may have to lie somewhere else.  The story is reminiscent of the Twilight Zone episode The Monsters are Due on Maple Street, wherein an entire town discovers it has lost all use of its electrical appliances and even cars at the hands of a mysterious force.  But unlike the television drama, the real life story is playing out quite differently – and though many radio controlled devices are not working still others appear functional – at least for now.

But are the events playing out in Kingsclere a taste of things to come at a time when the Sun’s activity increases and we are seeing more solar flares carrying the same type of electromagnetic radiation?  Experts have warned for years that if that were the case, we may be looking internationally at a far more desperate situation.  In the mean time, let’s hope the situation in Kingsclere is resolved with answers, not mysteries.