In 1934, a respectable gynecologist named Colonel Robert Wilson was credited for claims of sighting “something in the water” and having taken the photo above.  For a month short of 60 years, the photo was the centerpiece of evidence for the believers who insisted that a large creature was swimming around Loch Ness near Inverness, Scotland.

In 1994, barely a month short of the 60th anniversary of the photo report, a London newspaper reported that the photo was a fake. Colonel Wilson was the front man for Marmaduke Wetherall, a film maker and self-proclaimed big-game hunter. According to the story, five men were involved in the 60 year hoax.  The other 3 conspirators were Wetherall’s son Ian, stepson Christian Spurling, and a London insurance broker named Maurice Chambers.  Wetherall had been sent to Loch Ness in 1933 by the Daily Mail to investigate the monster and reported discovering a foot print in December of that year.

This announcement about the faked photo was the result of a reported death bed confession by the last surviving of the five, Christian Spurling, who died at the age of 90 in 1994. Before dying, Spurling reportedly revealed to two Loch Ness researchers, David Martin and Alastair Boyd, that he had made the “monster” which was actually only a foot tall and 18 inches long.  The article suggested that Spurling suffered ridicule because of his association with the monster and that revenge was the motivation for creating the fake.  He apparently made a significant amount of money over the years as a result of the hoax and, if the confession was true, also got the last laugh.  OF COURSE, LIKE THE MONSTER ITSELF, THE MODEL SUPPOSEDLY PHOTOGRAPHED HAS NEVER BEEN FOUND EITHER!

There is MUCH more to the story however.  “Nessie”, as the monster of the loch has come to be known, was a legend at least 1400 years before the purported photo hoax.  One of the earliest confrontations with her was by St. Columba, the Irish monk who converted most of Scotland to Christianity in the 6th century.  The photo and resulting publicity lead to as many as 10,000 recorded sightings of the mysterious creature in the loch and over 250 remain unexplainable.  A MONSTER WAS PART OF LOCAL LORE FOR OVER A MILLENIUM BEFORE THESE 10000 REPORTS!  (See The Loch Ness Monster at http://skepdic.com/nessie.html )

In addition, to these sightings, several scientific expeditions of the loch have been organized and conducted to find the beast.  Given that Loch Ness is a land-locked body of fresh water, the most spectacular of these expeditions was “Operation Deepscan“ which was conducted in 1987 and televised in many countries. They scanned the loch from one end to the other with boats dragging sonar equipment and spaced evenly across the width of the loch.  With the exception of one grainy sonar image that didn’t impress the news media, the effort produced nothing. (See http://ourworld.compuserve.com/homepages/lesj/deepscan.htm )

With many tales of the beast BEFORE the faked photo, the conspirators became associated with Nessie as a result of Wetherall’s investigation that was the result of the 1933 sighting by Mr. and Mrs. Spicer.  The Spicer’s eyewitness accounts are the strongest evidence of the monster’s existence according to Roy Mackal’s 1976 book “The Monsters of Loch Ness” in which he claimed there were 10,000 reported sightings.  Only 3000 of them had been recorded and Mackal himself studied these and concluded that 251 of them could not be explained. (See http://ourworld.compuserve.com/homepages/lesj/ness.htm )

Extensive ecological studies of the loch by The Naturalist indicate that the lake isn’t capable of supporting more than 30 metric tons of fish because the food chain is driven by bacteria instead of algae like most fresh water lakes.  Bacteria break down vegetation.  If a group of predators weighed 10 percent of the total weight of the fish available for them to feed on, researchers estimated that Nessie could not be larger than 300-kg (660-lb.).  OF COURSE, THEY ASSUMED THAT NESSIE IS CARNIVOROUS.  If instead, the creature was an herbivore, this entire estimate becomes as invalid as the photo ”“ and possibly the story of the photo being a hoax. 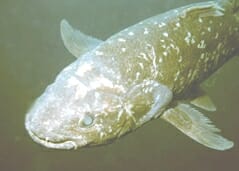 In the years since the notoriety of Nessie began in 1934, there have been literally thousands of zoological and botanical discoveries around the world.  In 1938, a large prehistoric fish named Coelacanth was discovered off the coast of South Africa near the Chalumna River.  Prior to 1938, it was believed to be extinct.  This discovery was believed to be the ONLY living member of the species for over 60 years until 1998 when a 64 lb coelacanth was caught by a fisherman in Indonesia.

Then in 2000 a large school of these fish were discovered off of Africa’s Comoro Archipelago.  Biologists believe it is highly unlikely that this species of fish would exist in only two colonies 10000 kilometers apart (in African and Indonesian waters).  Suddenly the rarest prehistoric fish in the world wasn’t so rare.

Although no skeletal evidence or other remains have been found to verify Nessie’s existence, Theories abound as to what this beast would be if it does exist.  The most plausible is that she is a descendant of a plesiosaurus, an aquatic dinosaur presumed extinct for tens of millions of years.  OF COURSE, so were the coelacanths until 1934.

Don’t forget that the first ASSUMPTION was that the monster was a fish eater.  The plesiosaurus was more of an herbivore.  The bacterial ecology of the loch would be more conducive to such an animal.  The amount of fish in the water would be an irrelevant detail.  Besides, lest we forget, baleen whales exist on the smallest animals in the sea ”“ krill and plankton.

Of course we assume that there MUST be skeletons since the beast has been sighted over at least a millennium and a half, right!  After all, in over 1500 years now, even if Nessie were the last, there must be others that have died and decayed in the loch.

Why make such an assumption?  We know that sea turtles, giants of the oceans not only migrate thousands of miles every year to lay their eggs, but they also live for hundreds of years, as do elephants and many species of reptilians.  Is it unreasonable to believe that a species could live for 1500 or 2000 years?

It’s been said that the most educated man couldn’t find his own arse in the dark.  In fact, I think I said that but if Coelacanths can swim around in colonies for millions of years, why is it unreasonable to assume that any other species couldn’t do the same? –  Especially in the cold, dark, murky, and remote waters of Loch Ness.

Oh yeah!  And what about Nessie’s cousins sighted in Canada and Russia?  (Maybe another story about them some other day.)