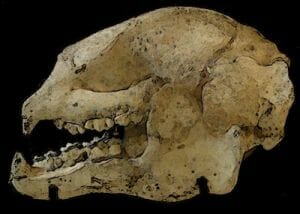 Though it has never been killed and  captured by hunters, the Nandi bear is one of the most feared and talked about wild cryptids in Kenya.  Named after the Nandi, who first discovered and reported it, the Nandi bear is considered to be one of the most vicious creatures ever to walk the Earth.  So vicious, in fact, that few who actually encounter it ever live to tell the tale of their encounter, instead leaving behind only grisly evidence of the disturbing encounter that took place.

It’s known by many names; the Chimosit, Chera, Duba, Vere, Kikambangwe, Sabrookoo.  And it has one of the worst reputations of any cryptid since the Beast of Gevaudan who is credited with killing hundreds.  It has been known to kill entire herds of cattle and humans without discrimination, eating the brains of its victims and leaving the rest for carrion eaters.

The creature has been reported with some consistency by the Nandi people, visitors to the area, and explorers for hundreds of years.  The consistency within these reports is perhaps what makes the story of the Nandi Bear most credible.  The creature is always reported as having features similar to a hyena, with thick hair sprouting all around its back, but with a coarse shock of hair coming out around its spine like a hyena’s mane.  The creature is anywhere from four to six feet tall, and has the ability to latch its powerful high shouldered four arms to any tree to grapple it and allow it to climb up.  Its thick fur is often reddish brown to dark brown in color with its mane being darker than the rest of its fur.  It has a pointed nose and snout with massive teeth.

Despite the creature’s name, there has not been a wild bear in Africa since the Atlas bear was hunted to extinction in the 1870’s.  The Nandi bear is suspected by some to be a form of wild hyena, while others suspect that it is likely an actual bear that has been terrorizing the countryside since it was first spotted.

It should be noted, however, that most do not suspect the Nandi bear to be a surviving Atlas bear since it was widely reported as a distinct creature even when the Atlas was still roaming the wilderness of Africa.  The true Taxonomy of the Nandi is likely not canine, as it has five toed tracks rather than the canine’s four.  Likewise this rules out any possibility of it being actually a form of big cat.  A raccoon, skunk, porcupine, and oppossum are likewise ruled out as their tracks, though five toed are only a few inches where the Nandi bear’s tracks are often in excess to eight or more inches.  It seems the classification of the Nandi bear as tentatively a bear is therefore accurate, though it exhibits behavior very unlike an ordinary bear.

Is the Nandi bear stalking prey all up and down Kenya’s wild reaches?  Or is it merely a long-standing series of coincidences and folklore?  Only time will tell as unfortunately the Nandi bear will have less and less room to hide in as time goes on and civilization expands.