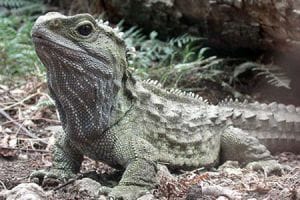 It’s a discovery too incredible to be believed.  And yet scientists have discovered a three eyed baby dinosaur in New Zealand that doesn’t drink water.  The incredible find may turn everything we know about these ancient creatures on its head.  The Tuataras may look like a modern day lizard, but the incredible creature is actually of the order Rhynchocephalia.  The creature did not share a common ancestor with the dinosaurs, it is a dinosaur.

It may not take a Jurassic Park to be able to see a dinosaur in person.  In fact, the incredible creatures are said to have survived in their current state since the Jurassic period.  The creature does not need to drink water, and it has a third eye placed at the top of its skull.

Unlike modern day birds, snakes, crocodiles, and lizards the Tuatara is unchanged from its original form.  And one of the incredible modern dinosaurs has been discovered once again.  The creature’s third eye, originally thought to be a non-working organ actually does see, but by the time it reaches maturity a thick layer of skin grows over this eye making it vestigial.  And it may not be as large as its Jurassic cousins, but the Tuatara is certainly one of the most resilient creatures to have ever existed next to crocodiles in terms of species longevity.

Somehow this tiny creature survived the hotly contested catastrophe that ultimately killed the rest of the dinosaurs and it still draws breath today.  But on top of that the creature only needs to take a breath once every hour or so in order to survive.  Is this the trait that allows the strange animal the necessary biology to have survived so long without dying out?  Or is there something more to the creature that allows him to survive even when the rest of his type was killed off during the mass die off at the end of the Jurassic period?

Theorists have for years suggested that the Loch Ness Monster and other creatures like it could have managed to survive this long without being detected by humans.  And since then the dinosaurs have been a recurring subject in books, films, and news stories worldwide.  Several cryptids which people have reported seeing are cryptids purely by virtue of their lineage to the dinosaurs. . So is Tuatara another one of these?  And if so, is this the ultimate and unfortunate fate in the world of media coverage when such an incredible animal is discovered?  If Loch Ness were finally proven, would it simply fade into the background shortly thereafter to the point where even experienced cryptozoologists would rarely be aware of it within the span of a few decades?

If you’ve ever wanted to see a Dinosaur you need not look any further than the Tuatara.  And now that another has been discovered in New Zealand, there is evidence that there may be even more roaming our planet’s surface than we ever imagined before.