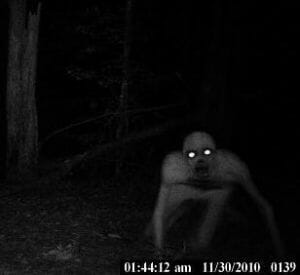 A photograph was recently sent in to a Baton Rouge, Louisiana news station and has many people talking since it first appeared last week.  The photo was allegedly taken by a trail cam and is, in a word, disturbing.  And if you think the photo itself is creepy, wait until you hear about the circumstances behind its discovery.

When NBC Affiliate NBC33 asked its viewers to send in their photographs, they were expecting to get a few strange holiday pictures, but nothing like the incredibly bizarre trailcam photograph they received depicting a horrific monster stalking the night in an undisclosed location and sent in by an anonymous viewer.  The viewer included a note detailing the circumstances behind the image’s discovery alongside the picture.  According to the sender, the picture was taken by a trailcam originally set up to take photos of wild game on the premises.  But then when they discovered the trail cam ripped to pieces, all they could recover from it was the device’s SD card.  When they examined the photos taken the previous night in an attempt to discover what could have possibly destroyed the camera, they expected to see images of teenagers or hunters poaching their land.  What they discovered, was that the final image taken by the camera before it was destroyed was this strange image.

Was the mysterious creature nothing more than a hoax?  Aside from the image itself, we have little more than the sender’s assurance that this is “totally for real.”  It’s understandable that the witness would want to remain anonymous as he would unlikely have any answers, although it is possible his destroyed trail cam might be something of interest for investigators if they were to get a hold of it.  There isn’t any information about the location of the wrecked camera, or if the witness threw it away or has kept it for possible future study.

There is the possibility that this incredible image is nothing more than photoshop, but there is nothing overtly wrong with it to suggest such an origin.  If it is photoshop, it was likely done by someone with a fairly good understanding of faking photographs.  Even the glow from the creature’s eyes, though unnatural looking, would be normal if a creature capable of seeing in the infrared spectrum were to look directly into the camera as an image such as this was taken of it.

So what is this photograph of really?  It’s hard to tell.  But there is one conclusion we can draw from this with a fair amount of safety, it will likely be seen much more now as it is one of the creepiest purported paranormal images to date.  Possible culprits have ranged from genetic experiment gone wrong to Bigfoot, an unknown monster, ghosts, demons, aliens, and even the chupacabra.  And if something fitting this description is reportedly seen in Louisiana again any time soon there will no doubt be quite a follow up story to go along with it.  Even if it were to turn out to be nothing more than a person, there are plenty of questions left unanswered.