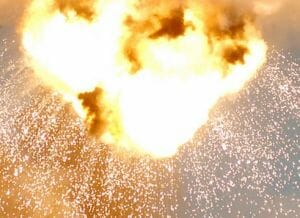 Roosters reportedly crowed, and baby birds noisily chirped ready for the day to begin this morning in Utah.  The only problem was, it was 2:00 in the morning.  Night became day as an explosion lit up the sky with such force, that some residents of Utah thought a nuclear bomb had gone off.  Shortly after the initial blinding flash, calls started pouring in to the local news carrier, KSL TV.  Excited sky watchers were not sure what they had seen, but many seasoned astronomers estimated it had been a meteor the likes of which had not been seen in the area ever in recorded history.

According to reports the entire spectacle lasted anywhere from eight to twelve seconds, the last four seconds of which the sky was as bright as mid-day.  Though many were out that night watching the Leonid Meteor Shower, astronomers indicate that the object likely was not related to the shower but was rather a transient rock traveling on its own through space that had intersected with our planet by chance.  Of course this happened mere days after the Earth’s near miss with a large asteroid ten meters across which, some estimate, could have caused a massive amount of damage had it hit a metropolitan area.

Meteors fall every day causing little to no noticeable damage.  Rarely does a meteor even hit a populated area considering the relatively small amount of Earth’s surface covered by inhabited areas.  Nonetheless, many close calls have happened as the rare falling meteor causes damage to objects and even injures those who are exceptionally unlucky enough to stand in their trajectory path.  The 1,000 ton explosion luckily happened high in the atmosphere far away from observers on the ground, but has given new life to a long standing debate: What if an even larger object were to impact our world?  Should precautions be taken to counter such an unlikely but devastating event?

It’s no secret that the thought of a planet killing asteroid has been in the minds of the public for years, even centuries.  Movies come out every few years that deal with the tension surrounding a planet ending asteroid, and disaster movies in general are always a sure-fire way to sell theater seats.  But there does seem to be some real concern behind it all.  NASA has been studying the potential for years, though they admittedly can only scan one percent of the skies for such an event.  Essentially, even if a planet killing asteroid was on its way we would most likely not even know it until days before its arrival.  But before you get too worried, millions of years have passed without such an event taking place, and there’s no sign that it will happen now before millions more years pass.  Of course there’s nothing saying it can’t happen either”¦

Once morning broke, a hazy blue swirling cloud of iridescence floated about the sky for miles, visible by many confused witnesses who had been asleep and missed the object lighting up the heavens.  It only goes to show that you can witness incredible things if you simply watch the skies.