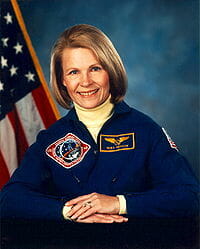 During mid-1961, the Soviet Union selection process for the first female into space took off, with the first person in space, Yuri Gargarin, lending his opinion to the task. Female pilots were scarce at this time, so the bulk of candidates were chosen from a pool of female parachutists. This was good news for Valentina Tereshkova. After the narrowing down of qualified candidates, Tereshkova joined three other women parachutists and a female pilot in a training program for female cosmonauts that started in 1962.

Valentina was ecstatic at being chosen, but since the program was something of a mystery to the public, she was forced to tell her mother that she was attending a training camp for an elite skydiving team. Her mother didn’t even know about Valentina’s plans to reach space. She actually found out when the flight was announced over the radio. It even took a long time for the identities of the other women involved in the cosmonaut program to be revealed with detail withheld all the way into the late 1980s. Out of the group of trained females, Valentina Tereshkova was the only one to travel into space.

To learn more about Valentina Tereshkova, check out the brief series that highlights her achievements, as well as the Soviet Union’s efforts to become the first to send a female into space.

In 1978, NASA begins to incorporate American females into their space program. They recruited six women to undergo the training to become astronauts: Rhea Seddon, Kathryn Sullivan, Judith Resnik, Sally Ride, Anna Fisher and Shannon Lucid. Additional information on the historic astronauts are found below and in other articles to follow.

After her selection in the space program for females, she participated in three Space Shuttle flights, as a mission specialist for STS-51-D and STS-40. She was also the payload commander for STS-58. Following her stint with NASA, she continued on with her participation in the medical community throughout Tennessee, Mississippi and Texas. Besides being an astronaut, Seddon earned a Bachelor of Arts degree in physiology from the University of California, Berkeley in 1970, as well as a doctorate of medicine from the University of Tennessee College of Medicine in 1973 , all before she was chosen to participate in the NASA space program.

Unfortunately, the potential of Judith Resnik was never attained due to the explosion of the Space Shuttle Challenger during the launch of mission STS-51-L. From August to September 1984, Resnik served as a mission specialist on the maiden adventures of Discovery. She assumed the same position when aboard the Challenger for STS-51-L. On January 28th, 1986, the Challenger launched into the sky, only to disintegrate only after being in the air for 1 minute and 13 seconds. All seven astronauts on board lost their life that day. Following the aftermath of the Challenger explosion, a crater (called Resnik) was named in her honor. It is located on the far side of the Moon. A statue and a dormitory at Carnegie Mellon pay homage to the astronaut.