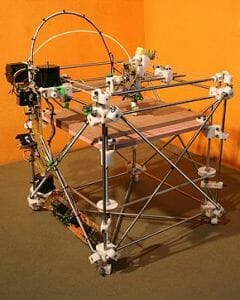 For years production was primarily in the hands of individuals who own factories, acquire raw materials, and pay employees to produce things.  But then with the advent of automation, these factories largely reduced the labor pool creating a labor crisis.  But now the upswing to that means that technically individuals may in time be able to design and build their own factories to make things they need.  Of course the next step was to create a machine that could create other machines.  And now these machines are being distributed among friends who own their own miniature factories.

3D Printing is essentially like other printers, and attempts to make 3D products out of raw materials.  The printers would essentially work in theory by taking a raw material, like plastic, liquifying it, and then injecting that onto a platform.  The machine then allows the plastic to cool and harden over the course of several minutes and the injector finally makes it into something that can be useful and recognizable.

The device no doubt has many applications already, but it is the potential for future developments that truly makes the machine a powerful tool for the future.  What would it mean for society if everything could be made by 3D printers?  It could mean several things both worldwide and for each local community.

One of the biggest problems with resource management is transportation.  A 3 Dimensional printer could reduce this resource management by making massive trucks hauling plastics along the highway obsolete.  Rather than buying, for example, a plastic cup from overseas a restaurant could simply create the cup in the back room and then use it as the restaurant needed.  Of course cups are fairly simple models, so it would be easy to design.  But it’s only an example.  The machines would also be able to create other machines and the parts used to improve the machine itself when better designs came out.  And because the plastics involved would be made of the same material (often a plant based recyclable material rather than one depending on petroleum) it could simply be shredded or melted back down into a filament to be used when creating another machine.

Of course there are many limitations on this technology as well, but a good number of these appear to be simply based on the device being relatively new.  In addition to power consumption being a factor (though some models currently in use are said to run on less electricity than a toaster oven) there would be limitations on what precisely could be created.  Currently only a limited number of plastics can be used for relatively simple designs.  In the near future, however, scientists and developers will be working on designing devices to create complex and detailed machines that can self replicate almost entirely into parts that can be put together easily and then start producing materials for people.  The potential applications are virtually limitless once people start developing machines that can make everything from screws and bolts to other machines and sellable merchandise.

In the next five years self replicating printers have the potential to do for materials what the internet did for information.  And the power of production will go from massive factories to the most innovative private individuals.