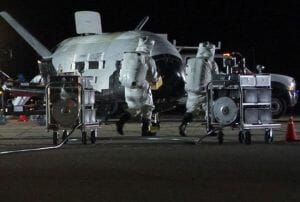 The X-37B is one of those spacecraft that has set the conspiracy theory crowd ablaze with speculation.  Unlike previous orbital missions, this new craft has been kept completely secret from nose to stern and everyone is asking what all the hubbub is about.  But as the craft, originally intended to come down 270 days later since its launch in April of last year, remains in orbit even longer than expected, some are beginning to wonder if something has gone awry or if this is all part of the original plan with the top secret space shuttle.

So what’s it doing up there?  The mystery seems to have an extended shelf life as very few information leaks have been snatched up by the media.  The X-37b is one of the most mysterious space missions ever undertaken up until this point.  And with a shelf life expected to be somewhere around 240 days since it was first launched, it seem engineers revised these figures quite a bit.  And all information regarding it is locked safely behind closed doors.

Some news sources have claimed insider information, such as the X-37b’s use as a military spy satellite helping with surveillance efforts in places such as Afghanistan, but it seems the real purpose of the craft is either unknown or mixed in with erroneous and conflicting reports of its purpose.  It seems the only reliable speculation we can do on the craft is by examining what the device comes equipped with, and much of that is similarly secret.

We do know it was concealed within the nose of an Atlas 5 rocket launched in April 22, 2010.  We know that the X-37 project was started by NASA before being adopted by the Air Force.  We can also draw a few conclusions based on the history of the X-37 project.  The X-37b is an orbital test vehicle with improved thermal protection from previous spacecraft, and an autonomous guidance system that can plot its own course.  The vehicle could theoretically be used for a number of purposes, but its uses are not exclusively military.  Its guidance systems, mysterious payload, and ability to return to Earth nearly every year before returning into space are all factors that have become a fertile breeding ground for a number of orbital missions, including even serving to rescue space stations with supplies or act as a sort of transport vessel in orbit.

Despite this, the fact that the Air Force is one of the primary keeper’s of the device’s true nature makes it highly suspected that it is in fact a surveillance vehicle of some sort.  Of course with increased fear over satellite disruption and a higher need to contest space around the globe with spy satellites being put up by multiple countries, there may be something to theories that it is actually an advanced system designed to track and remove satellites that may be dangerous or too invasive.  The fact that space does not have weapons in it already has caused some to wonder if this is one of several secret craft turning the space around the globe into a battlefield.