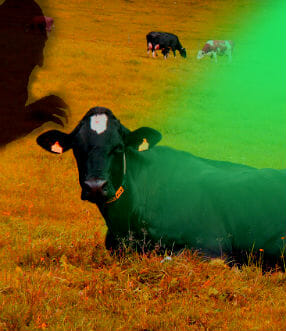 Authorities are looking for answers after a cow was discovered with some unusual markings dead in a field.  After examining the cow closer, it has been determined that this may be a genuine case of cattle mutilation, and the multitude of suspects are as vast as the mystery surrounding the case.  And it has a few details in common with other cattle mutilations of its kind.

The mystery all started in mid April when farmer Windell Gillis was out looking in his field.  Gillis, a veteran of cattle farming of some 33 years found the cow lying in the grass with a circular incision very much like those seen in previous cattle mutilation cases.  And still, even with the testimony of experts examining the details behind the case there is no concrete culprit to answer for the bizarre crime.  And this isn’t the first to happen this year.

In January Casey Hamilton spotted a similarly slain cow from his own herd in Missouri after it became inexplicably ill days prior.  The cow, which was on its way toward recovery when Hamilton checked on it on the previous day was discovered with mysterious incisions on it that bore the telltale signs of the unexplained phenomenon.  Police who examined the carcass noted in their report that whoever the culprit was, they knew what they were doing.

And police in this most recent case are equally baffled at the sheer strangeness of the incident.  Dodge County Georgia may not have a history of cattle mutilations, but previous cases have occurred  in other counties.  In 2009 equally mysterious cattle mutilations took place in Hall County, and other incidents in the news are on the rise in the past few years after the first major wave in the mid 1990’s.

Skeptics of the cattle mutilation phenomenon have for years suggested that it all boils down to simple natural causes and rogue psychotic surgeons with inexplicable intentions.  Other theories include cult sacrifices, extraterrestrial intervention, and legendary cryptids like the Chupacabra.  And regardless of the answer people use to make sense of these strange occurrences, it still leaves those who come across the unexplained animals on their own grasping for answers.  Are cattle mutilations nothing more than a cultural phenomenon?  If so, it would have to be a global one.  Are these samples being gathered for disease research by clandestine scientists?  If they were, the disease is unknown.  Or is this evidence of visitation by another world?  Beyond the cattle themselves, skeptics and believers have disagreed on the intentions of any alien perpetrators.

If anyone has the answer, there have been a number of rewards put out for solving the cattle mutilation mystery.  When Floyd K. Haskell asked the FBI to look into the matter in 1975 the conclusions drawn did not close the case for the public.  And by 2001 in Yogyakarta, Indonesia 200 goats were discovered mutilated in a single month.  With more cases pouring in every month, it would seem this case is far from closed.