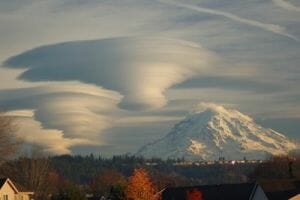 A witness submitting an account of his experience to the Mutual UFO Network has come forward suggesting that he personally took incredible footage of a UFO hovering in the night sky above the city of Chicago only a few nights ago.  The witness is convinced that what he saw was genuine and of otherworldly origin and declares that those who see his footage will come to the same conclusion.  The event, unlike so many dramatic events of this nature, happened only a few nights ago above Chicago in the dead of night as cameras were rolling.  And this is only the latest experience.

The witness also shared that he had seen other similar objects on at least one previous occasion, citing one where an object actually beamed a bright glowing light down on him as he watched.  He says that on the night of January 16th, he was out watching the skies with his video camera on his nightly UFO expedition in the city hoping to catch sight of something unusual, but was amazed when the object he caught on film actually seemed to hold evidence within the image of a larger cloaked vessel camouflaging itself as an unidentified flying object.  The glowing light was not only a single pinhole in the night sky, but also had other lights which seemed to be attached to a central body which was much larger.

From the witness’ description of the footage (which they say they will be releasing soon) one definitely gets the impression that something interesting unfolds on tape as the cameras roll.  But just what that is, is difficult to say.  Unfortunately, from the still they included with their sighting report the object looks to be a star in the sky and nothing more.  But then again once the object is analyzed, it’s possible it could be something far more interesting and compelling.  We will simply have to see if that’s the case as this strange incident unfolds.  And when the footage is released it will have to be very compelling to compete with the plethora of mysterious images that have accumulated both on the Mutual UFO Network’s sight and others.

Could we be looking at an incredible piece of footage that ultimately draws others to question whether or not our universe is looking at visitation by an extraterrestrial race?  Or are we simply looking into the looking glass and seeing nothing more but the same elusive evidence we have seen in the past?  As the year rolls steadily toward its second month and it’s evident that we’re looking at a particularly strange series of events still ahead of us both with the massive animal die offs, mysterious astronomical phenomena, and even the very planet itself acting strange, we can only hope that the UFO phenomenon itself proves just as interesting in this coming year.

And after the incidents in Moscow, which received very little attention and the strange sighting over London, many have suggested that this was all predicted by Ex NORAD officer Stanley Fulham.  And if these events truly were the ones he predicted, his next prediction suggests that an increase in “interventions” across all areas of the United States both rural and urban will start taking place.  If the transcenders are real, then they suggest an alien presence will be undeniably be interfering with terrestrial affairs worldwide over the course of the next year.  We can only wait and see if that is the case.