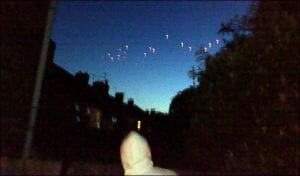 Families were stunned when they saw lights flying over there heads.  The most amazing part of those lights is that they were flying in a formation.  There were about twenty of them fling in the formation, until seven more appeared and joined the formation.  They were visible for about fine minutes and then disappeared upward into space.

The close encounter was captured by a quick thinking engineer Paul Slight on his cell phone on about 10:30pm on Sunday, May 31, 2009.

He was coming home from a day out cycling with friends in Lincoln when they spotted the lights in the sky.

These extra terrestrial crafts were hovering int he night sky over the town moving in different direction before they shoot up straight into space.

Paul took series of stunning photos of the event and this is what he had to say about the event.

Paul, 54, said:  “There were 26 of them at first, dodging and darting in between each other like they were playing a game.”

“After that, seven more arrived from the right hand side and weaved through the crowd of lights like strange kinds of aircraft.”

“After five minutes of moving around, the flickering yellow objects hung in the air for a second then shot off into the sky and disappeared.”

“I have no idea what they were – I’m not usually a believer but what I saw was really weird.”

“I have flown planes and helicopters before and I know these were not them, helicopters couldn’t line up like that or move that fast.”

Claire, 40, said: “I counted around 20 lights in the sky, they seemed to be moving around each other.”

“They were definitely not aircraft or fireworks, they moved differently, it was really strange.”

Phil Hoyle, from UK-based UFO Investigation Unit, said the way the UFOs had moved indicated a form of intelligence.

He said: “If these objects were circling one another you would have to rule out that they were fireworks.”

“If they were dodging and darting around each other it would indicate intelligent movement.”

Ruth Veron, spokesperson for nearby RAF Cranwell, said she did not know what the phenomena could be.

She said: “RAF Cranwell is closed over the weekend so it could not have been any aircraft from this base.”

Let’s see what the experts are going to say about this one.