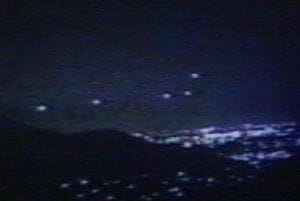 A witness from California submitted a report of a craft buzzing overhead unlike anything he had ever seen before, but many witnesses from the Phoenix Arizona area would have recognized immediately on the 27th of this month according to a report submitted by a witness to the Mutual UFO Network’s reporting center.  Though objects such as this are by no means rare, the witness was unaware of the similarity until after he had begun his report.

The Phoenix Lights incident was a major UFO mass sighting where witnesses observed a massive craft floating over the city of Phoenix Arizona over the course of several hours on March 13, 1997.  The lights were observed along with a massive triangular craft which was said to have seven lights total, with six on each side and a seventh at the very tip of the craft.  The object was reportedly easily larger than a football field and hovered without making a single sound.  The lights observed by the witness in California were exactly the same.

It all began at approximately 8:30 in the evening as the witness stepped outside to smoke a cigarette in his back yard.  As he looked up into the sky, he witnessed several lights in the sky moving in formation and was traveling from Northeast to Southwest.  As it hovered and passed overhead, the witness was struck by how peculiarly silent it was, emitting no sound like an ordinary aircraft, but instead simply giving the impression of a large noiseless boomerang.  As it traveled past the witness it disappeared behind the house, leaving the witness confused and filled with a sense of awe over the event.  But that was by no means where the event would end.  As he continued to stands there, still scanning the sky and completely reassessing his opinion of the UFO matter, he suddenly caught sight of the mysterious object once again.  This time it was moving from the East, apparently making its way across to an area to the East without his knowledge and gradually glided West.  As the witness watched he got the opportunity to observe once again how silent it was as it passed overhead.  He would then get yet another opportunity to witness the craft floating in the heavens, this time moving from the South in a Northerly direction.  As the object was floating about the sky, he called in his report to a local radio station and made his report and began researching what the object could have been.  It was during this time that he discovered a similar object being spotted over the Phoenix, Arizona area in 1997 in an event that would eventually be called the Phoenix Lights Incident.

The witness also included in his report that during the second and third passes overhead his wife had been alerted to the mysterious appearance and witnessed the object passing overhead as well.  As their house was in relative proximity to an airport they spoke briefly on whether it could possibly be an aircraft, but noted that the lights on the wings glowed steadily without showing any sign of blinking.  Additionally it floated without any noise.  And as they observed the object they additionally noted that it didn’t appear anything like any known aircraft.