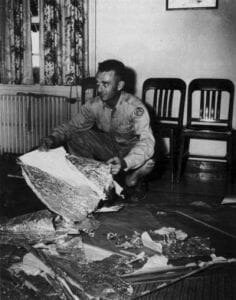 With its iconic lore the Roswell UFO crash which happened July 2nd, 1947 the Roswell UFO incident is one of the most widely quoted unsolved mysteries of a generation and has stood the test of time with new information always coming out.  The nature of the mystery grows ever stranger as more information is released on a monthly basis.  While some of these stories and claims are later proven false, an overwhelming amount remains entirely a mystery.

And the mystery only deepens when we take into account the vast variations between differing accounts of the events that took place.  The official facts are simple enough, but it’s the details that have varied widely from account to account.  It all started on July 2nd, when something (first an an unknown, then reportedly a weather balloon, then a nuclear missile shield program, then something else) crashed on a small ranch just outside the town of Roswell, New Mexico.  The first accounts that came through stated that the recovered craft was actually an extraterrestrial spacecraft.  The story was even run in the Roswell Daily Record and other newspapers as well.  It was after this first official report on July 8th that made the public suddenly anxious to find out more about these mysterious objects that were being sighted all over the world ever since Kenneth Arnold first spotted the objects one month prior.  The summer of 1947 was an extremely active time for UFOs to say the least.

And now as the world celebrates its sixty-third anniversary since the incident the facts surrounding the case have only become more mysterious.  Hundreds of books have been written on the subject suggesting everything from divine intervention to a serious conspiracy by the aliens themselves to invade US and Earthly airspace without the knowledge of its inhabitants.  Area 51 sprung from the lore of the Roswell crash, and there are rumors that the incident led to both human interaction with extraterrestrials at the highest echelons of government, and the reverse engineering of alien technology by humans.  The incident also preceded the abduction phenomenon.  Since this incident a mere 63 years ago, an entire culture has sprung up with its heroes, its villains, and its own relics of mystery.  Without Roswell, it’s entirely possible that the field of UFOlogy would be quite different from how it is today.  Additionally, the components of the craft itself, which are said to be the first and possibly the last technology of alien origin.  These components are rumored to have helped mankind develop everything from fiber-optics to stealth technology.

So what does the year hold for Roswell Crash Lore?  Will we soon find ourselves bent wholeheartedly on the search for the truth?  Will new facts arise that result in definitive answers for one of the greatest conspiracies ever questioned?  Will the government change the official account of the events that transpired that day once again only to leave out key elements that are important to “national security?”  Only time will tell.  In the mean time, happy 63rd anniversary on a conspiracy that would change culture and our lives forever.