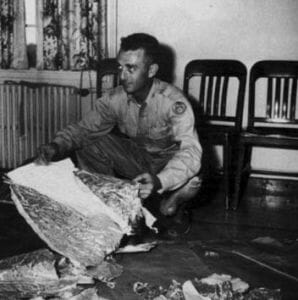 The Roswell Incident sticks out in the minds of many UFOlogists and indeed anyone even remotely connected to the phenomenon of UFOs as the single event that changed how we both view our world and how it related to the rest of the universe.  It is often referenced as the single moment where we moved into a more cosmic awareness of things in our universe that were beyond our human ability to create tools as we always had.  And yet the entity that became aware of it, the US government is said to have covered it up from the rest of the world.  But why?

Let’s illustrate one of the five major reasons the government may have found it necessary or tactically advantageous to leave this mystery covered up, and the possible reasons we may still be living in a world prior to the discovery of alien life.  The scenarios are either based on speculation or on the testimony of witnesses who were present at the scene or during the aftermath.

First, is one of the most horrifying possibilities.  After the rancher stumbled across the wreckage he soon contacts the proper authorities and they begin investigating.  What they find are alien bodies either within or near the craft, a mysterious wrecked space faring vehicle with technology onboard many hundreds or thousands of years in advance of anything we have on Earth, and one other thing – human cadavers.  The aliens, upon reaching Earth had discovered a number of organisms including cattle, and in order to further their own understanding of the universe around them they did as humans have done for decades, they dissected organisms to learn how they worked.  But the discovery of human remains would have been terrifying to the military, prompting them to quickly cover up the incident to ensure others would not be forced to live with the same horror and cause a panic.

After this the military makes contact with the aliens and makes an agreement with them – they must no longer kill humans (particularly citizens of the US and its allies) for their research.  The aliens, clearly having shown their weakness and lost a key piece of technology would be motivated to cooperate if the craft was divided up hidden away in such a way that no one would be able to know the location of all its parts.  And of course in the mean time there would be a long term slow study of the craft and gradually increasing contact between the aliens and the government as we are brought into the cosmic neighborhood.  The cover-up itself would not only ensure people would not be killed, but would perhaps even save the entirety of the human race from certain destruction at the hands of an invading alien race.

But certain agreements may have also been made between the government and the alien visitors as well – including allowing the testing of humans assuming they were brought back safe at the end of the ordeal.