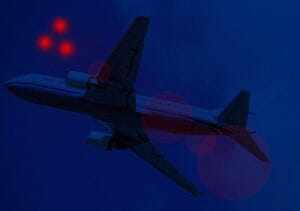 It seems there’s no end to the UFO wave we’ve been going through, even though this most recent slew of activity is very quiet in comparison to some of the UFO waves that have been hitting the world in recent months.  Still, there’s no shortage of stories as one passenger shows with his detailed account of the object he saw outside the window of flight 106 on its way to Frankfurt, Germany.

There’s certainly no end to the amount of inconvenience we must go through now to get on a plane and travel around the world.  Security checkpoints, lack of amenities due to budget cuts, delayed flights, and there are UFOs buzzing our aircraft.  When the witness presenting this story (we’ll call him John to protect his identity) first reported it, it was clear he was quite excited by his experience, and perhaps a little confused by the mysterious nature of the object he spotted.  Nonetheless, he did conduct himself in a composed way as he tried to ascertain the object’s nature.

It all began as he looked out his window as they passed over Ireland and spotted an isosceles triangle of red lights hovering in the distance.  The event occurred as they were somewhere between 60,000 to 80,000 feet in altitude.  The objects appeared to be quite large and were blinking in a sort of uniformed manner.  As John watched, he wondered if the object could be a reflection bouncing off the window from one of the lights from within the cabin.  He cupped his hands around his eyes and placed them over the window to block out any light from within and could still see the three lights outside the window.  John also noted that the wing tip on the right side was white, as he could see from his window, but these objects were clearly red.  In addition, he was unable to see the tail lights so it couldn’t have been them.  And he had to look up from his window.  This object was clearly tracking them from a few hundred feet up, but was still large enough and/or close enough that it could still be clearly spotted.

In addition, the objects the plane passed under were stationary.  As they traveled beneath it, it did pass over them and eventually disappear.  John reports that it was similar to seeing something on the ground pass under you, but in reverse.  Whatever it was, was not a light connected to the plane.  John clearly watched it appear, pass overhead, and then disappear moments later.  He hadn’t been taking any drugs, and was not intoxicated in any way.  It’s clear that whatever he saw, it wasn’t supposed to be in the same airspace they were occupying.

John’s detailed report is reminiscent of Rod Serling’s Twilight Zone classic Nightmare at 20,000 feet in which a young William Shatner is terrorized by a creature he can see outside his window, but the other passengers fail to notice.  Of course one of the major differences is that John didn’t relay his story to everyone in quite as melodramatic a way as Shatner’s character.  One can only hope these objects in the sky aren’t likewise tampering with craft as they fly the crowded mystery filled skies.