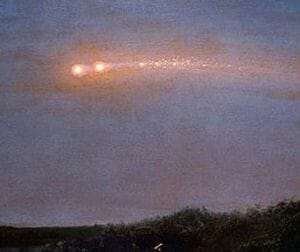 What began as a routine traffic stop in Texas ended in the capture – not of a criminal, but of footage showing a strange object streaking across the night sky.  Was the footage of a simple meteor glowing in the night sky or something more dramatic?  Just as UFO watchers have predicted, an increase in the number of cameras out watching the world has led to an increase in the number of recorded UFO incidents – and police dash cams are no exception.

The object filmed on the police dash cam was spotted by residents throughout the Bell County area suggesting whatever it was, the object was likely extremely high up.  And looking at the footage one of the first things noticeable is just how slow and sustained the movement of the light is as it travels across the screen, lasting for several seconds before disappearing to the right of the camera.

The dash cam belonged to Little River-Academy Police Chief Troy Hess.  Hess observed that while his car was pointed North, the direction many of the witnesses described the object to be relative to their position, he did not immediately know what the object could have been.  In an interview with Austin news outlet Statesman, Hess said the object got larger as it traveled, and its colors changed several times during its journey.

So what was it?  Astronomers, including those stationed in the area have suggested a meteorite as the most plausible explanation.  Still others looking at the film cannot help but wonder at the strange controlled speed the object takes, and the fact that it doesn’t appear to diminish or disappear like most meteorites as it plummets to Earth.  Most space rocks disintegrate as they plummet to the Earth.  But this mysterious object did not disappear until long after it had left the camera’s frame.  However, if it had been very far away, and therefore far brighter, it may be possible for the object to have appeared as it did on film that night.

Residents, on the other hand, had their own theories.  Those who witnessed the object passing overhead suggested it may be a UFO or even a plane that had caught fire and was beginning its descend to pick up speed in an attempt to blow out the flames on the craft.  As no air complications were reported, it seems the meteorite explanation is carrying first place.  Even so, it is very difficult to tell.  The object is merely a perfect sphere of light, obscured by the fog seen rolling in the area just beyond the patrol car’s headlights.

And of course any time the UFO phenomenon becomes entangled with the police, it’s always a reminder of the original Lonnie Zamora case where Zamora witnessed not only the taking off of a vehicle, but the creatures which exited from it.  Of course in 2010 the story lost some of its mystique when a former prankster admitted having some hand in the incident.  Police are often considered some of the best witnesses because of their attention to detail and their experience with handling unusual situations.