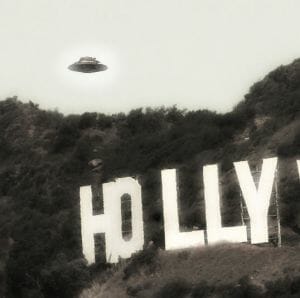 When we look at stories of UFO sightings, generally the objects themselves and whatever unknown occupants within seem to appear mysteriously, interact in ways that may have only an indirect effect on their lives, and simply disappear with no real explanation.  But in an incident reported recently to MUFON, a UFO appeared weeks in advance and again to save the entire family from a fire consuming their house.

The report was made regarding an incident which took place in 2008 in Columbia South Carolina, but has remained secret until now when the witnesses are finally deciding to release their story.  it all began on January 28th in 2008 when the family’s daughter witnessed a cigar shaped object hovering above the trees at her school.  When she came home she told her mother about the incident, and neither knew what to make of it.  Exactly one week later the family’s son would notice the same cigar shaped object hovering above the house silently before finally vanishing.  Once again the report would be made to the parents who would be still hapless about what the sighting meant.

The sightings would continue when on the ninth of February the family’s daughter would be mysteriously roused from sleep and walk to the window to once again see an object hovering very low and close to the house outside and near the house’s entrance.  As she turned to return to bed, she noticed smoke rising up from between the cracks in the floorboards and ran to tell her mother.  The mother walked downstairs and saw that the entire lower level of the house was completely engulfed in flames.  The mother would quickly gather up the rest of the family and they would escape the burning house to safety.  Before fire crews could arrive the house would be completely engulfed.

The fact that the fire raged so out of control without the smoke detectors going off immediately suggests that working smoke detectors were not in the house.  As smoke kills through carbon monoxide poisoning just as much as the flames themselves, the family may have – had they not been awakened in time – been rendered unconscious by the smoke and never received a chance to escape their fate.  It was the daughter’s noticing the smoke coming up from the floor that allowed the family to reach safety.  But what was it that caused her to wake up so suddenly in the middle of the night?  And why was there a mysterious cigar shaped object hovering over their front door that night?  When the mother asked her daughter what had awakened her, she once again told her of the mysterious cigar shaped craft that had been haunting the family for weeks.  The UFO that had been following them for almost a month had just saved the family’s life.  Did it know a fire was coming the whole time?  Was it responsible for somehow waking the daughter and ensuring the family’s safety?