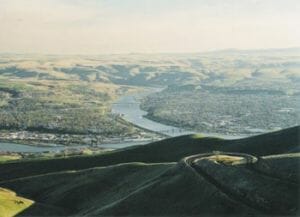 An eastern Washington family claims that they’ve been seeing UFOs over their skies over their town.  While spotting these UFOs they also spotted unusual helicopter traffic.  Later that night, they spotted a “grey being” running in their backyard, according to witness testimony from the Mutual UFO network (MUFON) database.

The witnesses reported that there was helicopter traffic in a place where usually there is no traffic in the airs.  The helicopters seemed as if they were looking for something, said the witnesses.

When the helicopters where in the air, the witnesses heard an odd sound.  They described the sound as a  “very low decibel hum, which made a kind of whum, whum, sound (higher to lower range and back again).”

With the sounds the family witnessed pulsating lights in the sky.  With the lights came a stench in the Washington air.  Then they saw a bright object about 25 miles away form them in the sky.  Then the object sped towards them, stopping three blocks away from them.  They said that it only took seconds for this object to get to them.  When the object arrived it stood hovering 200 feet off the ground.

They say that the object was “shaped like an orb with spikes coming out and seemed to have a companion light under it to one side.”  The family watched the light for about two hours from inside their home.  Them at 3 a.m.,  their daughter looked out the kitchen and started screaming.  She said there was a grey shape, “about 4ft tall, grey colored from top to bottom, in an approximate human form moving rapidly across the yard from south to north.”

Go to the next article and there is a whole account, “UNCUT,” of the whole eyewitness event that was filed with the Mutual UFO Network (MUFON).