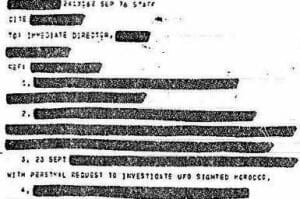 Julian Assange recently released a video in which he answers several questions asked by members of the public and covered various topics.  But when the subject of UFOs came up he finally outlined what his bombshell UFO referenced Wikileaks documents would entail.  According to the video released to Youtube, the actual truth may be far stranger than we thought at first.

It’s no secret that Wikileaks likely wasn’t going to release the final evidence that proved the presence of extraterrestrials.  And so the alternative was more likely than not going to be the investigation of other groups such as foreign diplomats or politicians.  But it seems the actual truth is far deeper.  According to Assange, the Raelians were under investigation by the FBI.  The Raelians, who are best known for their claims to have cloned a human being, were picked up in the media and -as Assange points out- became the focus of an intense investigation in the media for this reason.  Whether the claim was the catalyst to the bureau’s investigation of the alien backed group or not is something we’ll have to wait for.

The Raelians, led by Rael who says there should be a fusion of science and religion have had as their basic tenets of free love and a spreading of happiness to all people on Earth.  They also believe very much in the existence of aliens and state that these aliens were the creators of the human race.  Currently Raelians are the subject of some controversy, arguably purposefully so, due to the existence of programs such as Clonaid, which advocates strongly for cloning of humans as a step toward Rael’s vision of a utopian world.  Clonaid says it does not exist as a result of the Raelian movement, but its founder Dr. Brigitte Boisselier is a Raelian.  But this, and the moral support the two organizations have for one another are apparently where the similarities end as Clonaid receives no funding from the Raelians.

But apparently the order has been receiving a great deal of attention not only from the media, but also from the FBI, although what precisely this attention has been for has not been confirmed.  Are the Raeleians further along in their projects than we thought at first?  Is it possible there’s more to the claim that the organization had successfully cloned a human being?  And if so, where are they?  The announcement was made first that Clonaid had successfully cloned a human girl named Eve.  The girl was later said to be put into hiding and it was said her true identity would never be revealed to the public.  Is it possible one of the things Wikileaks uncovered was the child’s real identity?  And if so, and if science has reached the level where the ethics of human cloning can no longer be swept under the rug, what could it mean for our society in the future?  Though it may not be the most politically significant Wikileak yet, this upcoming release from Assange could prove to be more than we bargained for in revealing just how strange the world really is.