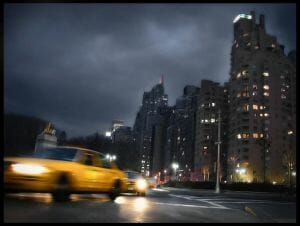 A witness from New York, New York reported an object that defied explanation and left them wondering what could possibly have had such strange flight characteristics.  The object they reported was nothing like anything they had ever seen before, so they quickly made an attempt to videotape it.  The witness reports the strange object has left them baffled with an unexplainable feeling that we are not alone in the universe.

It all began four days ago on May 15, 2010 on Saturday night.  The witness was walking a block from Bellmore Avenue when they noticed a strange dark orange ball of light in the sky moving fast to the southeast of the witness’ position.  As he walked to follow the strange aerial craft, the object hovered and disappeared behind a house.  Not wanting to miss such an opportunity, the witness then walked back north to where he had come from and turned to the northeast where two more strange balls of light streaking across the sky following the first after the first became visible once again and disappeared.  Thinking they might be meteors, the witness looked closer, but realized the objects were moving far too slowly to be simply meteors.  As he watched, the witness continued watching and observed a total of ten objects move across the sky before disappearing at the other end of the sky.  The objects were all dark orange, but had a red swirling phenomenon inside them that looked almost like liquid fire or lava swirling inside a red glass marble.  Then, the witness suddenly had an idea: Why let such an opportunity pass them by?  He ran inside his mother’s house and told her about what he was seeing, but she was uninterested in going outside, so he got a glass of milk and went back outside.  When he saw another ball of fire streaking across the sky, he ran inside and grabbed his video camera.  The final object to streak across the sky last night the witness was able to observe with the video camera, but the footage he got was shaky and did not provide any conclusive evidence of the strange phenomenon he was observing.  Kicking himself for not being able to get footage, he kept watching the sky for some time, but could not see anything further.  The witness submitted his video to MUFON and those familiar with the case are still waiting for him to submit it to Youtube or another video sharing community.

Skeptics may think these objects were nothing more than meteorites, but the witness reports that the objects hung suspended moving overhead very slowly; far too slowly to be alien craft of any sort.  The witness then reports that the strange phenomenon saw the objects moving in a straight line one after another as though they were directly following each other.  Those who are knowledgeable of meteor showers have indicated that meteors are usually all over the sky.  Even if they do move in the same direction, they are often spotted at noticeably different positions streaking across the sky at once.  As it stands, this case remains completely unexplainable.