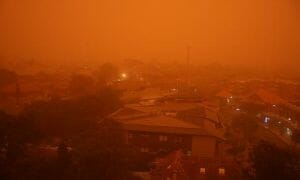 Residents of Sydney Australia were startled Wednesday when they awoke to find that the sky had turned the color of blood.  Others, already well into their day reported that in Brisbane it began fine, but as the day progressed toward lunch-time a mysterious cloud blanketed the city, causing unease among several Brisbanites.  By the time it was one O’clock the sun was partially obscured, and a moody red haze hung over the entire city as though it were the end of the world.  “Judgement Day,” Warren from Sidney jokingly called it, “As though someone had painted the sky with a paintbrush.”  The cause was not, however, as it might have looked, from one of the four horsemen of the apocalypse, or a tripod-mounted invading Martian war machine.  It was simply, as one 1970’s band called it, “dust in the wind.”

A dust storm, the worst in the seventy years since 1940, had kicked up enough matter to blot out the sun for several hundred square miles, severely disrupting life for all unlucky enough to be caught in its path.  By latest count, that includes 4.2 million in the metro population.  A drought, the worst in Australian history, currently plaguing farmers in the countryside is largely to blame along with strong wind-currents.  By noon, already, it was starting to pile up on the streets and cars, blocking out air-conditioning filters, getting into everything, and leaving many high-rise window washers to consider resignation.  Flights were also diverted, delayed, and canceled all throughout the Australian air-traffic system, including three flights to Sydney which were diverted and told to land in New Zealand and await further instructions until visibility improved.  Passenger ferries across the famous Sydney harbor were also halted, disrupting travel for commuters even more.

The source of the dust was a dust-storm moving through Australia’s dry inland, blowing grit and debris into the sky and pushing it toward the coastal population.  The pollution index for air quality was the highest on record for the cities as over 250 people called the ambulance services declaring they were having difficulty breathing.  No deaths were reported yet as of the night of September 23.  In the evening, conditions improved allowing some flights to land at Sydney airport, and for ferries to resume, but frequent delays were still reported.

The psychological impact of the dust storm seemed to be profound, however.  Early in the morning several posts on internet forums around the world began popping up asking what was happening in the cities as some turned to the internet for answers.  Many cited biblical passages and ancient prophecy that this was an ill omen for Australia, and possibly the world.  Many cultures throughout history have used the idea of a red sky to be indicative of the end of the world.  Still others say it is due to global warming and/or El Nino.  Any time the weather makes news, it seems to be bad news.  Still, if one can look at the plethora of images snapped throughout the cities, it seems to be a temporary, but captivating and beautiful inconvenience.