NASA’s Cassini spacecraft has had a busy week, snapping stunning new images of two of Saturn’s moons — smoggy Titan on Feb. 15 and wrinkled Enceladus on Feb. 16.

Visible in radar images released today are a crater, channels, and terrain similar to the area where the European Space Agency’s Huygens probe landed on Jan. 14. 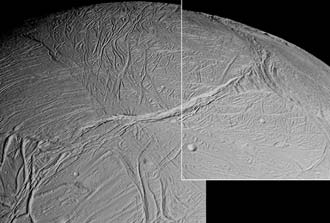 The crater is approximately 60 kilometers (37 miles) in diameter. Earlier this week, the radar team released an image of a giant impact crater dubbed “Circus Maximus,” about 440 kilometers wide (273 miles).

“The appearance of the small crater and the extremely bright, hence rough, blanket of material surrounding it is indicative of an origin by impact,” said Dr. Jonathan Lunine, Cassini interdisciplinary scientist from the University of Arizona, Tucson.

From the crater’s size, scientists estimate that it was created when a comet or asteroid roughly 5 to 10 kilometers (3 to 6 miles) in size slammed into the surface of Titan. The feature lacks a central peak, suggesting that it has been eroded or otherwise modified since formation. Rainfall, wind erosion, and softening of the solid material in which the crater formed are all possible processes that might have altered this impact feature.

Also visible in the radar images are channels located just east of Circus Maximus, the large impact crater. The longest channel is approximately 200 kilometers long (124 miles). The channels appear to flow from the slopes of the crater. The fluid was most likely liquid methane, given the extremely cold ambient conditions at the surface of Titan. The area somewhat resembles the rubble-strewn plains in the region where the Huygens probe landed.

Just one day after the Titan flyby, Cassini turned its sights on Saturn’s moon Enceladus, revealing a fascinating, tortured world of ice. The spacecraft swept within 1,180 kilometers (730 miles) of the moon’s wrinkled surface, providing the first-ever high resolution images of this world with the brightest, most reflective surface in the solar system.

Since NASA’s Voyager spacecraft flew past Enceladus in 1980 and 1981, planetary scientists have been intrigued by the moon’s wrinkled terrain and smooth plains, some of which appeared to be relatively free of impact craters. Smooth, crater-free surfaces on moons and planets indicate geologically young ages, while wrinkles may indicate tectonic activity or volcanism.

“Cassini has now viewed these terrains at almost 10 times better resolution than Voyager,” said Dr. Carolyn Porco, Cassini imaging team leader based at the Space Science Institute in Boulder, Colo. “Interestingly, the icy surface of Enceladus appears to have similarities to both Europa and Ganymede — two prominent icy satellites of Jupiter — and topographic relief of about 1 kilometer [.6 mile]. Both Europa and Ganymede are thought to have subsurface water layers, or ‘oceans,’ so the similarities with Enceladus are intriguing.”

One view released today is a high-resolution mosaic showing complex systems of fractures and resurfaced terrain. Among the most intriguing features in the images are a series of small, dark spots, which in many places seem to be aligned in chains parallel to narrow fractures.

A false-color view shows some linear features on Enceladus with a slightly different color from their surroundings. Different colors of ice may be caused by varying compositions or varying ice crystal sizes. Either one can indicate different formation mechanisms or different ages. Another early highlight from the flyby is a high-resolution stereo view of Enceladus. Stereo views are helpful in interpreting the moon’s complex topography.

Other preliminary results from the visual and infrared mapping spectrometer show a surface composed of only pure water ice, with no other compounds detected. Ammonia or ammonium compounds and carbon dioxide were expected, but not seen in the data. Further analysis may find trace amounts. “The spectra look like laboratory fabricated water ice, indicating the ice is quite pure,” said Dr. Roger N. Clark, Cassini science team member at the U.S. Geological Survey in Denver.

During the latest flybys, Cassini was 1,577 kilometers (980 miles) above Titan, and 1,180 kilometers (730 miles) above Enceladus. Cassini will conduct an even closer flyby of Enceladus on March 9, coming within approximately 500 kilometers (310 miles) of its surface. More than 40 additional Titan flybys are planned.

The Cassini-Huygens mission is a cooperative project of NASA, the European Space Agency and the Italian Space Agency. The Jet Propulsion Laboratory, a division of the California Institute of Technology in Pasadena, manages the Cassini-Huygens mission for NASA’s Science Mission Directorate, Washington, D.C. The Cassini orbiter and its two onboard cameras were designed, developed and assembled at JPL. The imaging team is based at the Space Science Institute, Boulder, Colo